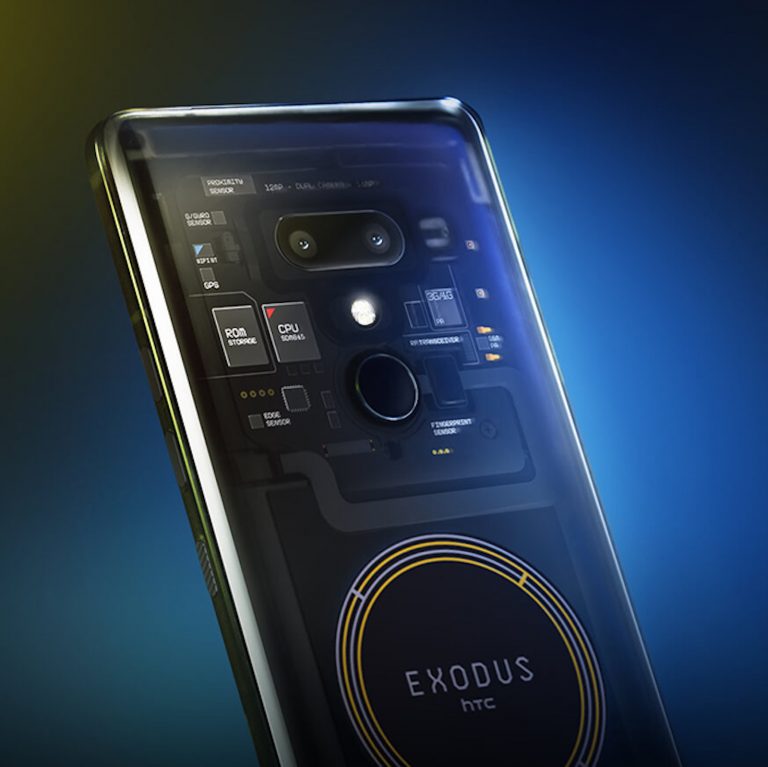 Review: HTC’s Exodus 1 Is an Impressive Phone With a Basic Crypto Wallet

After weeks of delays and hundreds of frustrated customer messages in its Telegram channel, HTC finally shipped its “blockchain phone” on Jan. 14. The HTC Exodus 1 promises an array of features for cryptocurrency users, but the manufacturer couldn’t keep its promise to ship the devices in December. With the phones finally rolled out, news.Bitcoin.com unboxed one of the semi-transparent devices and put it through its paces.

Also read: These Developers Claim They Can Crack Any Hardware Wallet

The Exodus 1 Is a Big Phone With Grand Aspirations

There’s no mistaking the Exodus 1 when it slips out of its protective wrapping and into the palm of your hand. Even if you’ve hands like baseball mitts, you’ll struggle to operate this phone with one paw. Thankfully it’s got a feature called Edge Sense 2 which enables one-handed convenience by shrinking the visible screen when you double tap on the side of the phone. At 157 x 74 x 9.7 mm, 188 grams, and $ 750, the Android O-powered Exodus 1 is a phone that’s as hard on the pocket as it is on the wallet. For that $ 750, however (or rather its BTC, LTC, or ETH equivalent), you’re getting a whole lot of smartphone.

While this review will focus on the cryptocurrency elements of the phone, we’ll start with the basics. Given that you’ll be using the Exodus 1 as a smartphone a lot more than you’ll be using it to send or receive crypto, it’s imperative that you can abide what it has to offer when compared to flagship Android phones such as the Goggle Pixel 3 ($ 799) or the Samsung Galaxy S9 ($ 720). The Exodus 1’s features include:

The Exodus 1 has twice as much internal storage as the Galaxy S9, the same processor, and same resolution cameras. The Exodus 1’s battery is the same size as the larger S9+ and has the same 6GB of RAM, while both phones are of similar dimensions. Samsung’s S9 and S9+ are both 1.2mm slimmer than the HTC however. The Google Pixel 3 only has 4GB of RAM, a smaller battery and the same processor as the Exodus 1. The Pixel 3 does have some things in its favor though: its main camera, while lower resolution, is arguably better than the Exodus 1’s, it’s slimmer, at just 7.9mm, it has an eSIM, which some users may prefer, and runs a newer version of Android.

With the Exodus 1, you’re getting a phone that can match Samsung and Google’s leading models pound for pound in most areas. Aside from being a little bulkier, there’s not much between the handsets performance-wise. The question, then, is whether the HTC’s exclusive feature – a built-in cryptocurrency hardware wallet, with the key stored in a secure enclave – justifies choosing the Exodus 1.

Take a Trip to Zion

Zion is the name of the wallet app that comes pre-loaded on the Exodus 1 and, while limited in functionality, it works just fine. It is beyond the scope of this reviewer to determine whether the “secure enclave,” separated from the rest of the phone’s operations, makes Zion more secure than the average crypto wallet app. “Theoretically” is the likeliest answer, though that’s probably a matter for the Wallet Fail team to resolve. The Zion wallet supports BTC, LTC, ETH, some ERC721 tokens, and ERC20s such as BAT, the latter the native token of the Brave browser, which also comes installed.

Sending and receiving cryptocurrencies is easy, and the UX is reasonable. The collectibles section of the wallet is less scintillating though; import a Cryptokittie and all you’ll get is a small thumbnail of the cat, with no ability to view it full-screen or read its “cattributes.” It’s all very meh. From a privacy perspective, the Zion wallet isn’t great either. There’s no ability to create new addresses, for instance, so you’re stuck with the same three wallets for BTC, LTC, and ETH unless you chose to create an entirely new 12-word seed and install a fresh wallet.

The social recovery option, enabling you to select trusted friends to help restore the wallet in the event of phone loss, is a welcome touch. While this presents an additional attack vector, it’s a trade-off cryptocurrency users may be willing to make in return for having access to crypto on the go. There are clear drawbacks to owning a blockchain phone of course. The very fact that you have one suggests you have crypto stored on it, which instantly makes you a target. If you’re lazy and have enabled fingerprint access to your wallet, a physical attacker or law enforcement could gain entry without too much trouble.

A Solid Phone That’s Likely to Get Better

iPhone owners are unlikely to swoon over the Exodus 1, but if you’re an Android user who’s due an upgrade, the mere act of switching to a new handset running a current OS and that’s fully equipped with the latest spec makes the Exodus 1 a pleasure to use. Features such as squeeze force, which will open the camera or shrink the screen when you grip or tap the side of the phone, are very nifty. Edge Sense will also ensure the phone doesn’t time out when held in your hand, and the rear fingerprint sensor is responsive and well positioned.

The biggest drawback to the Exodus 1 – the lackluster cryptocurrency wallet – could and likely will be improved through software updates. Even if advanced features were to be added, and the number of supported cryptocurrencies was to increase, however, you’re unlikely to hold much funds in the Zion wallet. Secure enclave or otherwise, it’s debatable whether the Exodus 1’s wallet is any more robust than the leading crypto wallet apps it’s competing against.

While a little industrial in places, the Exodus 1 is a significantly slicker device than Sirin Labs’ “Finney” blockchain phone and can stake a claim for being the leading smartphone in what is still a very small vertical. Whatever the fate of the Exodus 1, it’s likely this won’t be the last time we see a hardware manufacturer targeting the crypto crowd. In fact, with Samsung’s trademark filings suggesting it’s thinking of following suit, blockchain phones could soon go from being niche to the norm.

What are your thoughts on the Exodus 1 phone? Let us know in the comments section below.

Disclaimer: Bitcoin.com does not endorse nor support this product/service.

Readers should do their own due diligence before taking any actions related to the mentioned company or any of its affiliates or services. Bitcoin.com is not responsible, directly or indirectly, for any damage or loss caused or alleged to be caused by or in connection with the use of or reliance on any content, goods or services mentioned in this article.

The post Review: HTC’s Exodus 1 Is an Impressive Phone With a Basic Crypto Wallet appeared first on Bitcoin News.