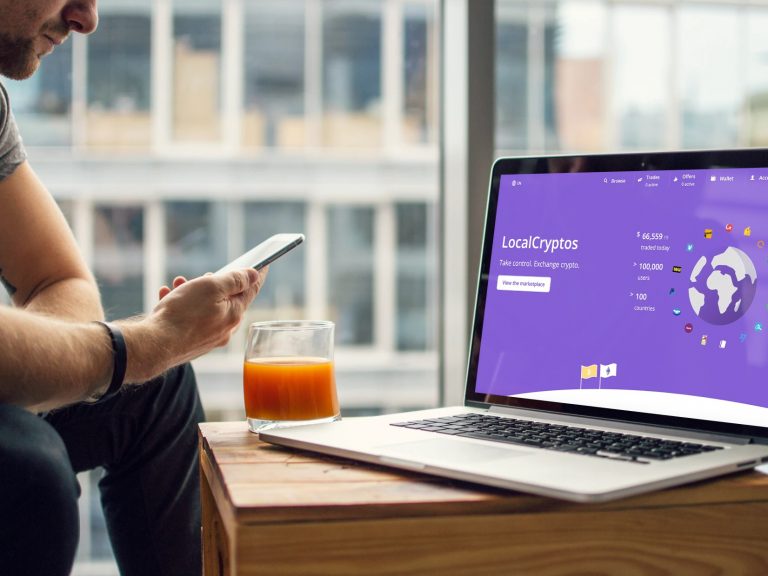 If you’ve ever had a sudden need for fiat while all in crypto, you’ll understand the difficulty of cashing out without KYC-ing away your identity and that of your unborn children. Localbitcoins is now an AML hellhole, Bisq is great if you’re happy to wait two days for a trade, which leaves what exactly? Localcryptos.com. That’s what.

Also read: A Bitcoin War Is Brewing Over KYC

What’s the Deal With Localcryptos?

Before its rebrand, Localcryptos (LC) went by the name of Localethereum. Launched in Australia in 2017, the platform’s addition of BTC support in late 2019 made a name change inevitable. Just as Localbitcoins.com (LBC) was raising its shutters, ejecting traders who’d been with it for six years through draconian KYC, Localcryptos swung open its doors and welcomed in the misfits whose only ‘crime’ was to desire to swap magical internet money for filthy fiat in privacy. LC haven’t minced their words in describing their main competitor, LBC, as “centralized, custodial and a far cry from private.”

The Finland-based LBC, to be fair, didn’t want to KYC all their customers away to Localcryptos; blame EU regulators and the jackboot stomp of AML legislation that crushes all who stand in its path. Still, when you can’t even make it past the login screen of Localbitcoins to export your trading reputation into Localcryptos due to KYC notices that literally stop you in your tracks, there’s something very wrong. KYC is a cancer on society and the world would be a better place without it.

But the purpose of this article isn’t to bitch about KYC – there are plenty of other news.Bitcoin.com articles that do that. Rather, it’s to review Localcryptos.com from the perspective of a cryptocurrency user wanting to swap BTC for fiat. I used the site a couple of times this month to cash out, and found LC to be better than LBC in virtually every way, from the clean user dashboard to the escrow and reputation system. As a 2013 OG of LBC, switching my affiliation didn’t come easy. But after a couple of effortless trades on Localcryptos, I was sold. Bisq is great for selling XMR, and local.Bitcoin.com for BCH. But for BTC and ETH, Localcryptos has got it locked down. 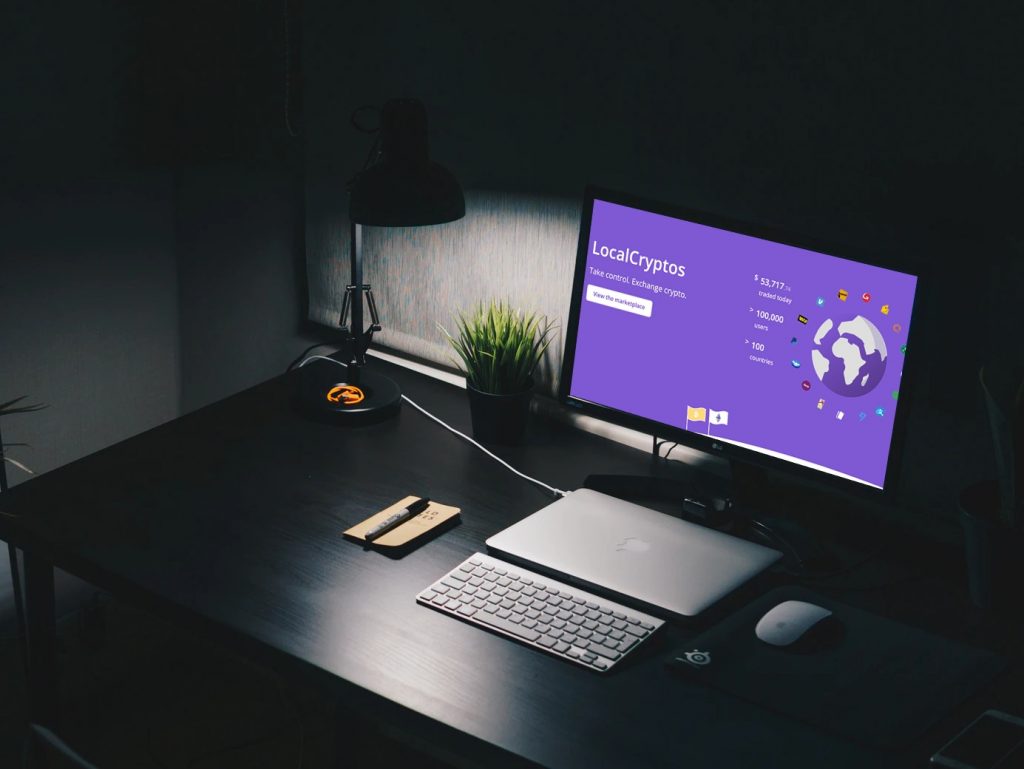 If you found your way around Localbitcoins okay, you’ll moonwalk through LC. To make sure, though, I enlisted the help of a friend who we’ll call Patrick. Patrick is new to crypto, and until this review was commissioned, had never sent a bitcoin transaction in his life. I instructed him to send some BTC from his Wirex account to Localcryptos and record his experience of losing his bitcoin virginity, adding “If there’s anything you’re unsure of while doing it, ask, but try and figure out as much of it as possible yourself.” Here’s what he had to say:

“Pretty simple process, really. After creating an account, confirming my email and sending some BTC from Wirex to my Localcryptos wallet, I was good to go. I hit the “Sell Bitcoin” button on the homepage, chose my preferred payment method (bank transfer), location (UK) and currency (GBP), then got a list of sellers along with the number of trades they had performed and the rate they were buying at. I chose a user with 3,000+ trades and 100% positive feedback and initiated the trade. Now, I had to fund the escrow account and send the trader my bank details, using an encrypted chat.” 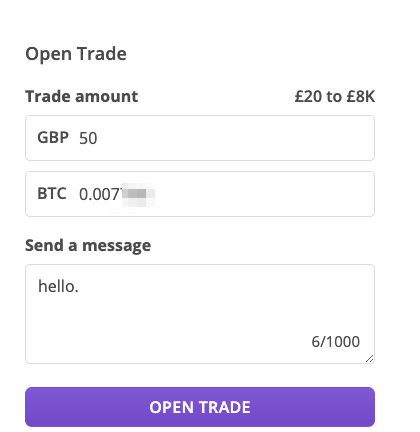 “It took about 25 minutes for the funds to reach the escrow, then the seller advised that he was transferring the agreed amount to my bank. After quickly logging into my banking app and verifying that the GBP was there, I hit ‘Release Escrow’ and that was it.” 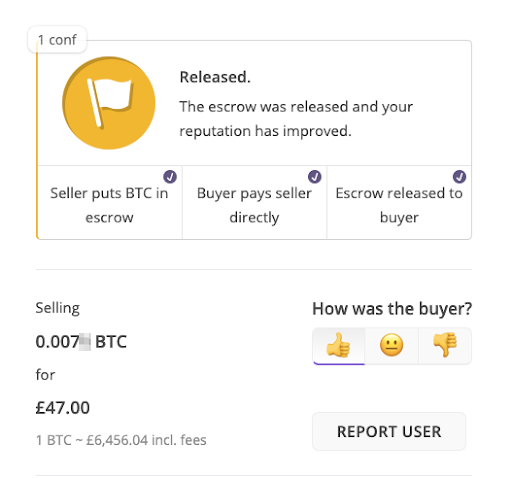 Patrick’s experience of using LC sounds effortless. But in the interests of full disclosure, I should note that he did reach out to me during the process for some guidance. In fact, he sent me a dozen questions over Telegram, adding “sorry for the bombardment of questions, it’s just not obvious and I wanna do it right.”

In the event, Patrick did everything right, and successfully completed his first crypto-fiat swap with minimal intervention on my part. Most of the areas where he was uncertain pertained to Bitcoin’s architecture, rather than UX failings on behalf of LC. That said, Localcryptos could still do more to help beginners out here. The first time you send bitcoin, in this case to a Localcryptos wallet, it’s not clear that the transaction requires additional blockchain confirmations before the funds can be moved into an escrow account and sold.

That was Patrick’s main sticking point; a 25-minute wait for BTC to confirm, with no information as to why his funds were unmoveable. My main complaint with Localcryptos is that there’s no ability to select your entire wallet balance at the push of a button. As a result, it’s common to set up a trade, realize you’re a few satoshis or vitaliks short of the total amount, and be forced to cancel the deal or send additional funds from an external wallet. This minor gripe aside, Localcryptos gets a thumbs up from me – and a nod from Patrick who’s now leveled up his crypto knowledge and found a convenient way to cash out when he’s strapped for fiat.

Localcryptos is light on regulations, letting you cash out without enduring laborious and invasive KYC – at least for now. What’s more, the platform utilizes noncustodial escrow, favoring smart contracts for ETH transactions and P2WSH for bitcoin. At no point are your funds custodied sitting on a centralized server. As with bitcoin P2P platform Bisq, and bitcoin cash marketplace local.Bitcoin.com, users retain their private keys, immunizing them from the fallout resulting from a hack or security breach. P2P exchanges that let you keep your privacy while selling your coins are a luxury in today’s surveillance society. Use them while you still can.

What’s your favorite non-privacy-invasive way to convert coins to fiat? Let us know in the comments section below.

Disclaimer: This article is for informational purposes only. It is not an offer or solicitation of an offer to buy or sell, or a recommendation, endorsement, or sponsorship of any products, services, or companies. Neither the company nor the author is responsible, directly or indirectly, for any damage or loss caused or alleged to be caused by or in connection with the use of or reliance on any content, goods or services mentioned in this article.

The post Rebranded Localcryptos Lets You Cash Out BTC Peer to Peer – Minus the Hassle of KYC  appeared first on Bitcoin News.