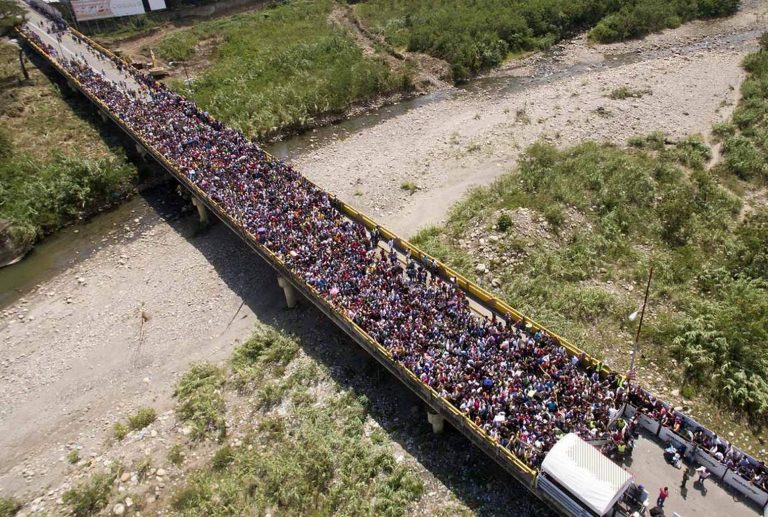 Arley Lozano, founder of the cryptocurrency based startup Panda Group, recently explained how his firm is spreading cryptocurrency adoption throughout Colombia and Venezuela. Panda Group has deployed 10 hybrid cryptocurrency point-of-sale (PoS) terminals that also act as automated teller machines (ATM). Four of the machines are situated near the border of Venezuela, giving refugees from the country and Colombian citizens access to cryptocurrencies like BCH, DAI, and BTC.

Spreading Crypto Adoption Throughout Colombia and Into Venezuela

In January, news.Bitcoin.com reported on Panda Group installing a hybrid PoS terminal that also works as a digital currency dispensing automated teller machine (ATM). At the time the machine was dubbed the “Exeler,” but since then the product has been rebranded as Pandabtm. Panda Group’s founder Arley Lozano said his team so far has installed 10 Pandabtms around Colombia and four machines are on the border of Venezuela in Cucuta city. The machines can be located on Coinatmradar.com and devices installed near the border are meant to help Venezuelan refugees who cross the Simon Bolivar International Bridge every day.

Panda Group emphasized that the machines process VES (Venezuela soberanía bolívar ) and COP (Colombian pesos). The devices allow anyone to process payments through the Xpay.cash payment system, which provides users with the ability to avoid fiat currency volatility. The machines process sales using a digital asset like bitcoin cash (BCH) or visitors can also purchase coins from the Pandabtm. Lozano told news.Bitcoin.com that the company has 15,000 users and three new partnerships. Panda Group is collaborating with Cobru, Gracon, and Pagos Inteligentes. Panda Group’s founder explained that the new alliances are meant to bolster true cryptocurrency adoption throughout Latin America. 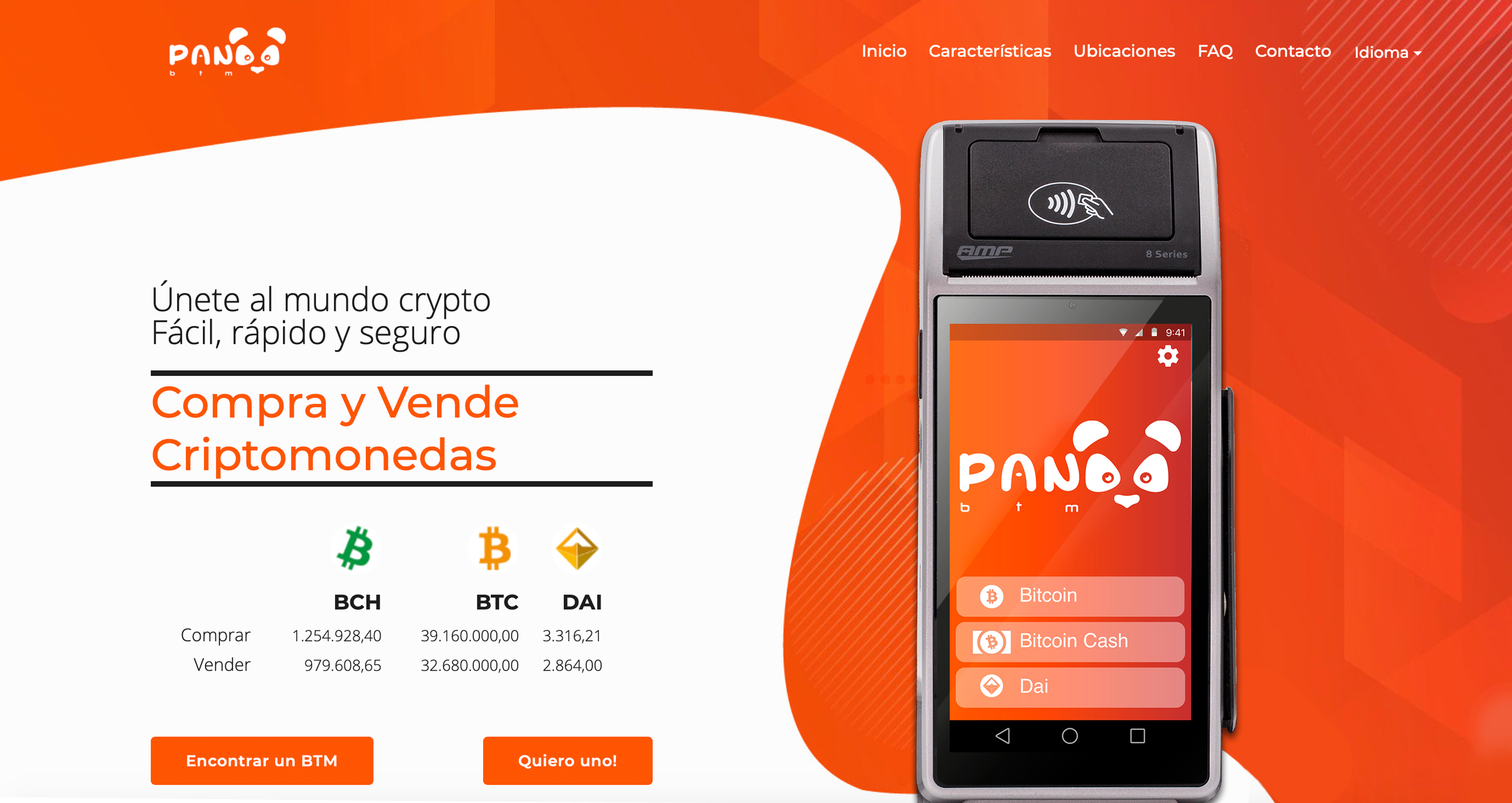 Opening Operations in Our Own House

In addition to the Pandabtm installations, Lozano said that Panda Group’s trading platform Panda.exchange is now allowing all Colombians to deposit and withdraw COP. Accounts will be able to trade 113 different cryptocurrencies and tokens against the local tender. The founder said that this is the first time the door has opened in his country as the team, based in Colombia, have previously worked throughout Panama, Europe, and Portugal.

“Panda Group is a Colombian and Venezuelan company that started its operations almost three years ago with the hope of opening our operations in Colombia and generating true Latin American adoption. However, thanks to the slowness and fears we ended up operating outside of Colombia, in regions like Panama and Portugal,” Lozano explained, adding:

Now we come to open operations in our own house and we hope that the Colombian government and the local banks see us as allies. Panda Group wants to encourage the true education of bitcoin and cryptocurrencies and heal the wounds caused by Ponzis and pyramid schemes that plagued Colombia.

Pushing the Orange Economy to the Blockchain

Lozano insisted that Panda Group wants the country’s citizens to know what true blockchain innovation and cryptocurrency solutions are. He noted that the Panda team is filled with passionate and talented individuals willing to work hard for that goal. The Panda Group founder detailed that Latin America was an “orange economy” filled with cultural and creative entrepreneurs. Between the Panda Group team, the Panda.exchange, Ccoins.io, Pandabtm, and Xpay, his crew is ready to take the “orange economy to the blockchain level.” Lozano commented further:

We will help all the individuals who want to learn what cryptocurrency technology is or assist them in buying their first digital currency using one of our many services where you can buy BCH, BTC, and more.

The demand for digital assets in Colombia exceeds many other Latin American countries and the region is second to Brazil in terms of adoption. In fact, Rodolfo Andragnes, executive director of NGO Bitcoin Argentina, explained that there is clamor surrounding bitcoin and its “popularity has been impressive considering that it’s been only ten years and hundreds of new cryptocurrencies have been created.” “Brazil, Argentina, Mexico, Venezuela, and Colombia are the countries with the highest activity and growth in the use of cryptocurrencies throughout Latin America,” Andragnes said in June. “Colombia has great potential and more and more people see the benefits of Bitcoin,” the NGO Bitcoin Argentina executive explained . Situated in Bogata, Lozano agrees that Colombia is a force to be reckoned with when it comes to digital asset usage and overall activity in Latin America.

One of the Pandabtm machines located in Cucuta near the Simon Bolivar International Bridge is aimed at helping Venezuelan refugees escape the hardships of their stricken economy. The 300-meter-long bridge spans the Táchira River which covers the Colombian and Venezuelan border. Cucuta is an access point for many Venezuelans seeking safety from the country’s economic crisis. The Simon Bolivar International Bridge sees a lot of foot traffic as Venezuelan president Nicolás Maduro closed the bridge to vehicular traffic.

“Thousands of Venezuelans cross the bridge,” Lozano told news.Bitcoin.com. “No cars are allowed to cross the bridge and only people can cross taking basic stuff like medicine, food, and supplies. They pass through to buy food and some of them are crossing to reach Peru or Ecuador. They pass and sometimes stay a few days — Some pass to work and return home in the night.”

The Pandabtm positioned across the Táchira River is in Villa del Rosario City which sees vast numbers of Venezuelan travelers daily. Lozano is pleased with the strides Panda Group has been making and concluded that the company’s goals include increasing cryptocurrency ease of use and spreading economic prosperity. The Panda Group founder added:

Our products are designed so that even our grandparents can use them and we are always thinking of our Venezuelan brothers and sisters.