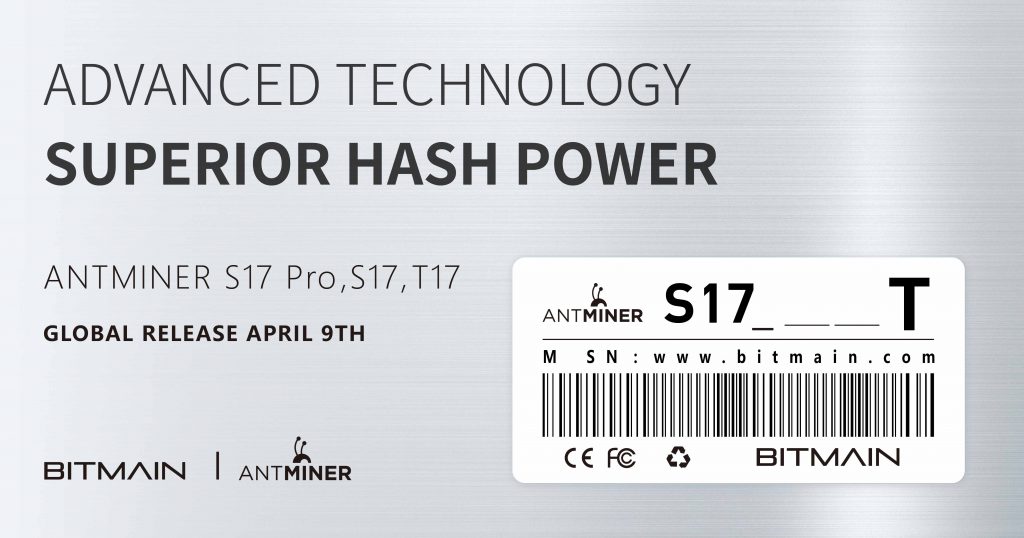 On March 29, the two largest mining rig manufacturers, Canaan Creative and Bitmain Technologies, announced the sale of their next generation devices that process the SHA-256 algorithm. Both firms are gearing up to sell the new products this spring as a slew of mining operations have been prepping up new facilities in order to take advantage of the wet season in China.

Bitcoin miners will be interested in the latest rigs that will be sold in the near future by the industry’s leading manufacturers. On Friday, Bitmain announced a sale date so the public can purchase devices from the Antminer 17 series which include the Antminer S17 Pro, Antminer S17, and the Antminer T17. The rigs will be sold globally on April 9, and come packed with Bitmain’s newly improved second generation 7nm ASIC BM1397 mining chips. During the announcement, Bitmain’s product manager of the latest Antminer series, Yangxin, revealed some details about the relationship between the company and the semiconductor foundry TSMC.

“The new miner offers a steep improvement in the hashrate in terms of space and power consumption,” Yangxin noted.

The BM1397 chips are produced using TSMC’s 7nm Finfet process and Yangxin claims the revamped 17 series will provide miners with 28.6 percent more efficiency than the previous 7nm equipped model using the BM1391. Yangxin stated that the future of mega-efficient SHA-256 miners will go beyond the 7nm scope. “From a technical point of view, there is no end to the development of technology. However, in the short run, the driving force behind the development of next-gen miners beyond 7nm chips is slowing down due to physical limitations,” Yangxin explained. The product manager continued:

With the nm size shrinking quantum effects, among other new challenges, come into play. It is promising that TSMC (Taiwan Semiconductor Manufacturing Company) is already in the process of building 5nm chips.

Bitmain’s announcement does not reveal the new products’ hashrate but the previous Antminer S15 produces 28 trillion hashes per second (TH/s). The 17 series specifications will be available on the official website when the devices go up for sale. Yangxin did disclose that there is a noticeable performance improvement compared to the previous generation chip and the 17 series models have a “higher hashrate in a single miner.”

Canaan Reveals the New Avalonminer A10

Following Bitmain’s announcement, Chinese firm Canaan Creative released information on the launch of its latest Avalon series. Canaan announced the new Avalonminer A10 on the company’s official Wechat account on Friday as well. Interestingly, Canaan’s ad says that the new miner will go on sale in March 2019, yet the official sale date is still unknown. Moreover, during the spring, Chinese miners have been flocking to Sichuan for cheap electricity during the wet season and mining operations have been buying up rigs for new facilities.

Canaan does reveal some of the specifications tied to the A10 device which include 31TH/s and power consumption of around 1736W off the wall. This means the machine boasts a possible 50W/T (watt per terahash) at max capacity. Other details such as the new Avalon rig’s price per unit are still unknown. The news follows rumors of Canaan reapplying for the company’s initial public offering (IPO) in Hong Kong because it expired. The finance publication Securities Times also reported that Canaan raised “several hundred million U.S. dollars” on March 11. Bitmain’s IPO application expired as well and the company has recently disclosed that the corporation will also attempt to go public again by reapplying.

What do you think about Canaan and Bitmain’s latest announcements concerning next-generation machines? Let us know what you think about this subject in the comments section below.