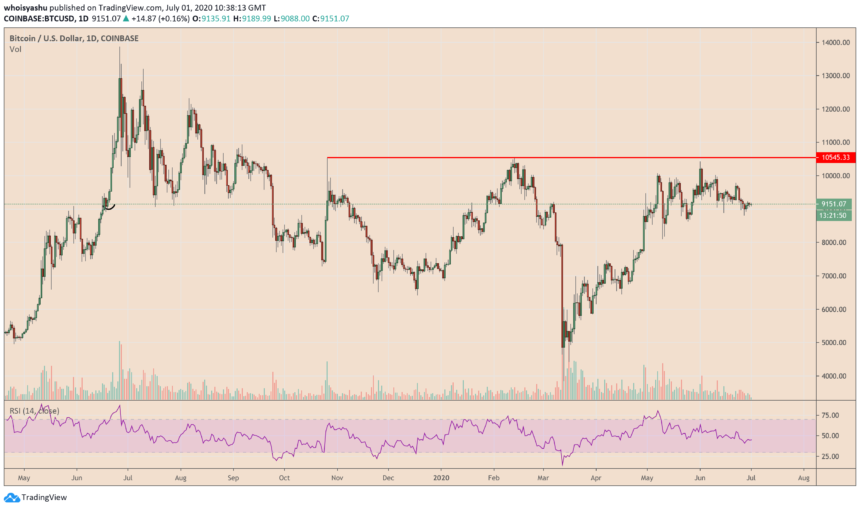 The price of Bitcoin on Wednesday rose modestly, signaling that the cryptocurrency will start the third quarter on a cautious note after closing the previous one more than 40 percent higher.

The BTC/USD exchange rate surged 0.16 percent to circa $ 9,151 on hopes that Federal Reserve would continue its stimulus program beyond the July expiry. The climb, nevertheless, failed to turn into an extended upside move as traders also assessed the rising number of COVID cases and its impact on the U.S. economy.

Bitcoin has so far reacted optimistically to the Fed’s decision to inject $ 3 trillion via the purchase of Treasury bonds and mortgage-backed securities. The cryptocurrency surged by more than 150 percent from its mid-March low after the central bank’s intervention.

The bullish behavior now looks poised to persist in July as the Department of Labor releases its Non-Farm Payroll report on Thursday.

Bitcoin, as well the U.S. stock market, is focusing on the Automatic Data Processing employment change in June.

Observers noted that the largest U.S. payroll company expects to have employed 3 million Americans in June after sacking 2.76 million in May and 19.557 million in April. The recovery in employment data may prompt the Fed to pursue a wait-and-watch approach at least until the end of July.

It is also because of the outcome of a Summary of Economic Projections (SEP) that shows “a general expectation of an economic recovery beginning in the second half of this year.”

Nonfarm Payroll Precast: We expect private nonfarm payrolls to surprise on the upside as more businesses reopen across the US.https://t.co/PHMBcC6pjH pic.twitter.com/dQkyPElBTl

Futures tied to the S&P 500 reacted as cautiously as Bitcoin to the U.S. NFP release, plunging by 0.42 percent ahead of the New York opening bell Wednesday. FXStreet analyst Joseph Trevisani noted that the benchmark index would benefit from a positive employment report, nevertheless.

That leaves Bitcoin with a short-term bullish bias. The cryptocurrency’s downside corrective has lately slowed down near the $ 9,000-9,100 range.

Meanwhile, a rise in the S&P 500, a market that has formed a positive correlation with Bitcoin, may prompt traders to push the crypto’s price into a new range to the upside.

The Fed chairman Jerome Powell on Tuesday cautioned the economy against expecting a full-fledged recovery. He cited the resurgence in COVID cases in California and Florida that sent the states into a fresh lockdown phase.

Mr. Powell, however, confirmed that his office expects to introduce additional relief packages for “certain industries” should the situation require.