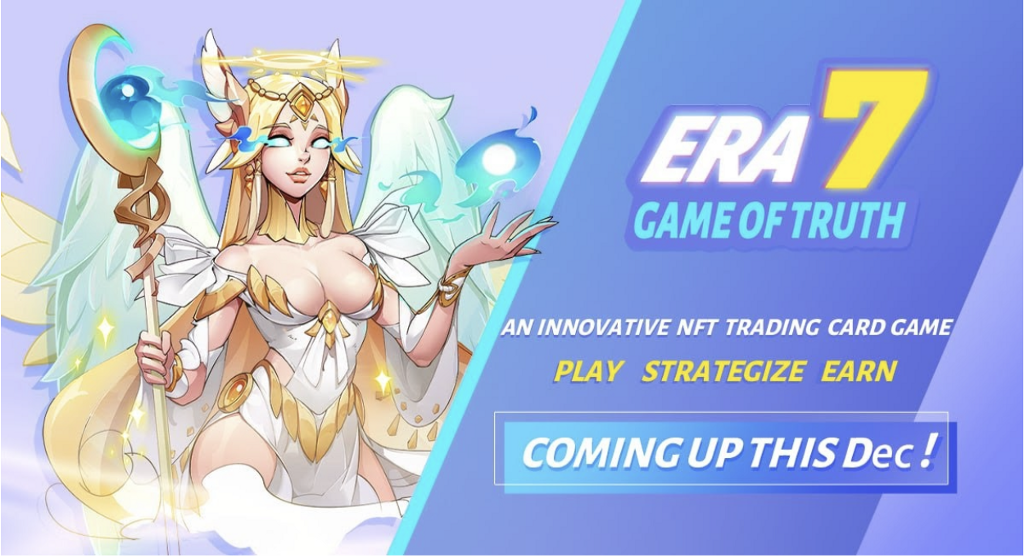 Singapore, November 12th, 2021 — Deploying the concepts of GameFi in the exciting combination of DeFi and NFT technologies, upcoming Play-to-Earn trading card game Era7: Game of Truth has successfully closed its first round of fundraising. Investors include some of the most renowned VCs and institutions in blockchain: Hashkey, Huobi, Okcoin, Binary Capital, DAG, Waterdrip, Dreamseeker, BTC12, Tembusu and Mobox.

Era7 will be launched in Q1 of 2022 and is expected to take the global NFT GameFi market by storm. The game has been developed by core team members who hail from well-known international Korean game manufacturers such as Com2uS, NCsoft, Nexon, and Netmarble, companies with more than 15 years of success in the traditional mobile and online video gaming industry.

Game of Truth is an innovative NFT-based competitive game based on TCG (Trading Card Game) concepts, with its creative essence coming from Hearthstone and Magic The Gathering R&D. Standing on the shoulders of giants, the Era7 team aims to bring innovation even further with the development of its GameFi product.

Players collect cards to fight and they win when their opponents are defeated. Given that the learning curve is not steep, the game appeals to all kinds of gamers — from your housewife and granny demographic to your technophile gaming gurus. Players from all levels will be able to find their place in the game. Moreover, Era7 incorporates a complete economic incentive system with the first batch of NFT drops slated for release in December 2021.

According to Newzoo, the overall market of the global gaming industry will reach US$ 175.8 billion in 2021, the total number of players will reach approximately 3 billion, with esports gamers exceeding 474 million. In 2019, the global Collectible Card Game market size was US$ 9,949.63 million and is expected to reach US$ 27,294.79 million by the end of 2026, with a CAGR of 15.89% during 2020–2026. Aware of the growing gaming market, as early as 2018, Era7 had already successfully developed and perfected its game and to date has amassed a user base of more than 10 million players.

The development team has included NFT concepts and technology which greatly benefit players. The income aspect and the value of the NFT assets will naturally attract a large pool of users to join. Furthermore, the game does not require prior knowledge of cryptocurrencies. Getting started is easy, and offers what every gamer wants — strategy and fun gaming.

Standing Out from the GameFi Competition

There are three ways that Game of Truth differs from other GameFi projects on the market. Firstly, the project’s games are rich in depth and content, providing users with long hours of entertainment. The large and well-designed card system is underpinned by a well-developed numerical system that supports innovative gameplay. The combination of a mildly competitive mode with extensive rich gaming content are not usually available in GameFi.

Secondly, the low threshold for players to get started and the extent of gaming content helps attract gamers from the traditional gaming space to join, creating a huge market when combined with the blockchain/crypto gamers.

Lastly, novice or experienced gamers can all have fun and benefit from play2earn — and that is a truth shared by both developers and players in this brave new horizon of GameFi. Both the project and the players work hand in hand to create an ecosystem of gaming that produces value to mutually benefit both parties.

Traditional TCG users will resonate with the exquisitely designed and excellent quality of all the Era7 cards. Card combination strategies are distinctive, and the game has established a market-oriented approach since the beginning of its game development. Presently, strategy gaming and play2earn, all while having fun, are its highlights.

The game contains 1,000 different cards, each having different values ​​and attributes, bringing players a variety of card combination strategies. A lightly competitive 3-minute game can provide gamers with endless imagination and fun, thanks to the unlimited changes in strategy.

What to Expect in Era7’s Premiere NFT Drop this December!

One billion Era tokens will be issued with more than half of which will be used for in-game incentives. Players can obtain Era tokens through the following: in-game event rewards, participation in daily PVP (player versus player) and various tournaments, land pledges and marketplace purchases. The Era tokens held by the player can be exchanged for cryptocurrency that can be traded on exchanges.

Era7 currently offers strategic gaming that provides competitive elements, with a focus on PVP gameplay. The game is designed to successively open up different types of competitions between players, such as ranked games and World Cup games, as well as other gaming activities such as watching and betting. While attracting traditional esport stars to participate, it will also groom and train new Era7 stars.

Plans for 2022 to 2028 include building a scalable competitive ecosystem that will encompass a live broadcast platform, esports community, animation series and GameFi IP. In the future, the most advanced UE engine will be deployed, combined with the Era7 platform to launch a competitive product based on the metaverse.

About Era7: Game of Truth

Era7: Game of Truth is a Play-To-Earn NFT-based trading card game (TCG). It offers the perfect combination of traditional gaming and decentralized finance (DeFi) to gamers, bringing an entertaining gaming experience while providing an avenue to earn.

According to Era7 ancient folklore, the seven races on the continent of Truth battle against each other for supremacy all year long, to vy for the title “King of Truth”. The victor from the Game of Truth emerges as the ruler of the continent whereby he and his race then enjoy the highest honors in the land.

HashKey, Huobi, Okcoin and other Leading Blockchain Institutions invest in Era7, a Play2Earn NFT… was originally published in The Capital on Medium, where people are continuing the conversation by highlighting and responding to this story.