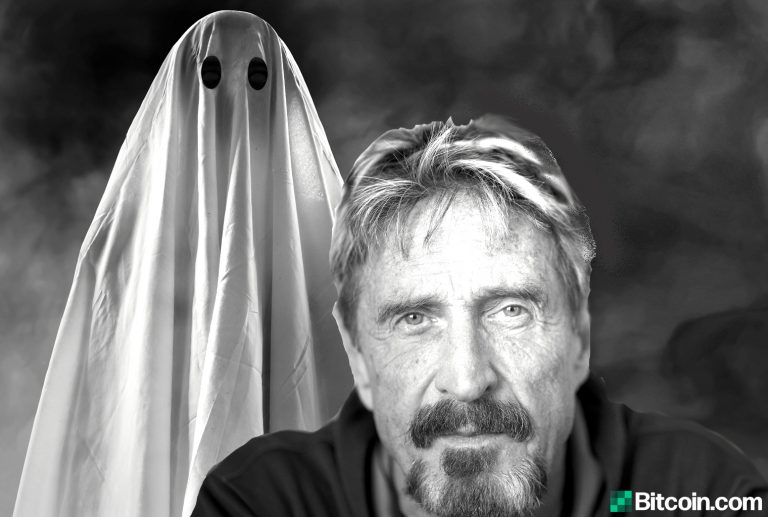 The U.S. Presidential candidate who remains on the run from the IRS, John McAfee, announced he’s launching a new privacy coin called Ghost. McAfee says the Ghost cryptocurrency will be a proof-of-stake (PoS) coin and it will be available on his decentralized exchange (dex). The former anti-virus software tycoon also stressed to the public on Twitter that by combining Ghost with his dex, governments won’t be able to shut the project down.

John McAfee recently announced that he is launching a PoS-based cryptocurrency called Ghost. The move follows McAfee’s recent ERC20 token called “Epstein Did Not Kill Himself,” a coin that made fun of the Jeffrey Epstein scandal. McAfee explained on April 11, that his new coin will have a white paper that will be published on May 15.

“My latest: Ghost – It’s a proof of stake privacy coin to make you a “ghost” when transacting online. Atomic swaps on McAfeeDex will let you trade against BTC/BCH/ETH and more,” McAfee tweeted. With a dex/privacy coin combo we now have full control of our finances,” he added. The project also has a website with a cartoon ghost and a few small descriptions about the new coin.

“Ghost transactions use a state of the art escrow pool to shield and erase the history of transactions,” the website explains. “Ghost transactions are verified using zero-knowledge proofs. Ghost is a proof-of-stake network controlled by token holders and users and Ghost has no central company or owner, and is ran and maintained by the community,” the site further adds. The website also notes that the Ghost project will have a Masternode system similar to the Dash protocol. Additionally, Ghost transactions are allegedly processed onchain in less than 60 seconds and for a “fraction of a penny paid in transaction fees.” McAfee’s Ghost website also details that people can obtain Ghost tokens for free by holding a token called ESH. The Ghost website states:

To claim your Ghost at launch (for free) you must be holding an ESH token on May 25th. 25% of the Ghost supply will be allocated to ESH token holders. The remaining supply of Ghost is allocated towards proof of stake rewards.

McAfee’s 2020 Presidential Candidacy and a Myriad of Crypto Projects

McAfee has been awfully busy even though he’s been on the run from U.S. tax authorities. Back in October, the 2020 Presidential candidate launched his dex with no restrictions. He spoke with our newsdesk in December 2019 and discussed topics like maximalism, Epstein’s death, and “the greatest gift since fire.” During the first week of January, McAfee said he was going to tokenize all 535 members of Congress. Moreover, that same week, the crypto community gave McAfee flak for backing out of his infamous price prediction bet.

Lately, McAfee has been speaking out against the propaganda and hype associated with covid-19. “Covid-19 will be virtually gone from infected countries by mid-May, because it is seasonal, like the flu,” McAfee tweeted. “But, it will be back in October, and we will have to lock ourselves in from October till next May. If we unlock in mid-season it will start over again — Bummer.” Further, McAfee recently told the public he has joined forces with Adam Kokesh, another liberty-leaning candidate who is also running for U.S. president. McAfee said that both candidates have mutually endorsed each other.

What do you think about McAfee’s new privacy coin Ghost? Let us know in the comments below.

The post ‘Governments Will be Unable to Shut It Down’ – John McAfee to Launch Privacy Centric Crypto appeared first on Bitcoin News.