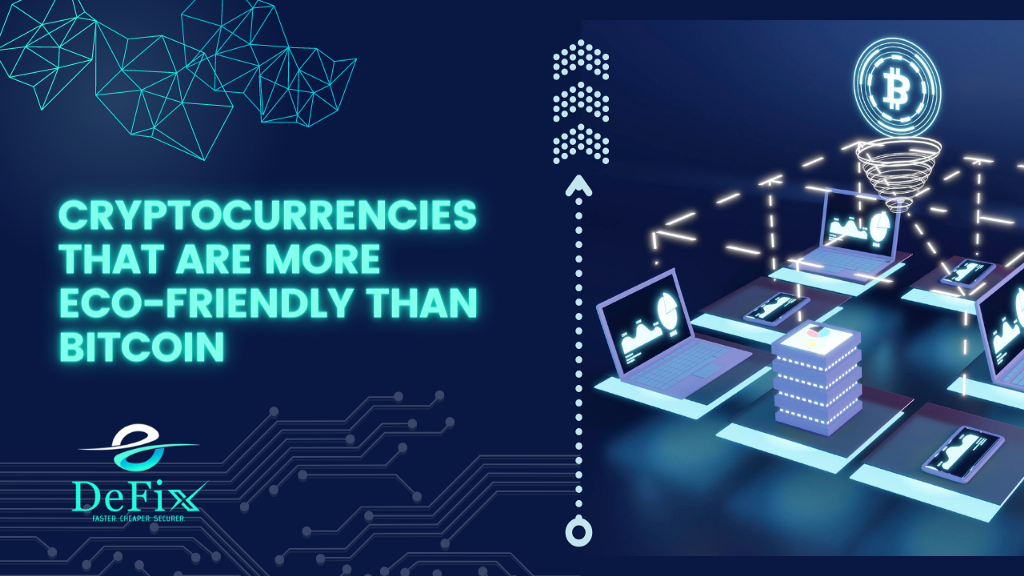 Get to Know Cryptocurrencies that are More Eco-Friendly than Bitcoin

In recent months, there has been a lot of focus on Bitcoin’s alarming ecological effect. Although attempts are now being made to reduce the cryptocurrency’s environmental impact, not every system is created environmentally friendly. Some investors are abandoning cryptocurrency in favor of eco-friendly alternatives.

There are more than 4500 mineable coins, so which of them are ecological and environmentally friendly? And which altcoins have a better chance of long-term viability than Bitcoin? Here are some of the leading competitors, given in no specific order, with the disclaimer that this is not financial advice.

SolarCoin is a worldwide, decentralized, and government-free cryptocurrency. SolarCoin may be spent and traded the same way as other digital currencies, but the platform’s primary goal is to reward power saving through solar power.

SolarCoin offers a new method to approach cryptocurrencies by releasing one Solarcoin for every MWh of solar energy generated. This network now depends on users submitting paperwork to confirm energy production, but the internet of things may make this method easy with automated updates from solar arrays.

BitGreen was formed in 2017 to combat Bitcoin’s ecological footprint. In contrast to Proof of Work agreement coins, it uses less energy. The firm established a non-profit organization to supervise BitGreen’s upkeep. BitGreen is designed to encourage efficient and environmentally friendly behavior. Users may earn BITG by carpooling, purchasing homemade coffee, and donating. Staking, desktop wallets, and master nodes may also make you BITG. An energy-efficient Proof of Stake method with SegWit and predictable master nodes is used by BitGreen. BitGreen may be spent on BitGreen’s partners’ products and services or exchanged on ProBit Exchange, Mercatox, STEX, and Crex24.

Cardano was created by Charles Hoskinson, the co-founder of Ethereum, and was the world’s first peer-reviewed blockchain when academics and scientists evaluated it. It is mainly used as digital money, but it may also be used for digital contracts, decentralized applications, and other uses.

Cardano can process 1000 transactions per second, compared to Bitcoin’s seven transactions per second. Cardano is fundamentally more environmentally friendly than Bitcoin because it employs a ‘Proof of Stake agreement method in which users purchase tokens to access the network. According to Cardano’s creator, this helps conserve an incredible amount of energy, who claims that the crypto network uses just 6 GWh.

Cardano is comparable to Ethereum in certain aspects, although it lacks much of the latter currency’s bloat. This allows Cardano to scale up to satisfy rising cryptocurrency demand without sacrificing speed or efficiency.

The Stellar network (a fork of Ripple) was published in 2014 to bridge the banking system and virtual money gap. Stellar, which allows quicker, simpler, and more cost-effective cross-asset and cross-border transactions, is increasingly considered a genuine competitor to PayPal.

The Stellar Development Foundation is a non-profit organization. Stripe (a payments company) provided startup capital, as did BlackRock, Google, and FastForward. The challenging market cap for Lumens and the absence of an inflation standard suggest that the SDF is trying to preserve a network that permits convenient, accessible, low-cost cross-border payments rather than making fast cash with the Lumen price increase.

The Stellar network’s consensus mechanism sets it apart. This SCP is open-source and depends on trusted nodes to authenticate transactions rather than the whole system as a proof-of-work or confirmation mechanism. The verification cycle is consequently simpler and quicker, lowering expenses and energy utilization. The federated byzantine agreement method is a more energy-efficient alternative to the Bitcoin-style classic mining network.

Unlike Bitcoin, Nano is free, quick, and requires less energy. It’s been operating since 2015 and has a low carbon impact presently. Not relying on mining makes it scalable and light. Nano uses energy-efficient block-lattices, and the block-lattice establishes an identity link for every user in the system. The Nano platform uses Open Representative Voting (ORV) to protect transaction blocks.

Asynchronous user account updates are possible on the Nano platform, unlike with Bitcoin and others. Nano eliminates rivalry and delays by using just sender and recipient account chains to conduct 125 transactions per second.

Amazon Web Services’ cloud computing technology may be used to mine Chia, making it an intriguing alternative to existing cryptocurrencies. Chia ‘farming,’ compared to the mining,’ of many other currencies, takes little time to set up.

In contrast to other cryptocurrencies, Chia was founded by Bram Cohen, the creator of BitTorrent. Many Chinese hard drives ran out when the platform debuted because individuals were scrambling for storage capacity to farm XCH.

The Chia Network uses the available storage space on the user’s computer to operate the decentralized network. Proof-of-space-time is used by the Chia Network in place of proof-of-work. Chia’s token, XCH, may be earned by storing a particular quantity of data for a given time. Cryptocurrency mining uses a lot of energy, and XCH was founded in 2017 to address this issue.

Customers may create their own blockchain applications using Holo. You can earn holo tokens by acting as an “agent” or “host” on the blockchain. Since Holo can empower everyone interested in cryptocurrencies but is currently sitting on the sidelines, its popularity is skyrocketing.

TRON is a Singapore-based non-profit public blockchain that supports practically every computer language. P2P technology enables producers to exchange apps directly on the network, saving electricity. Super Representatives (SR) are a two-tier decentralized government where any account may become a Super Representative and vote for SRs. Pre-mined Tronix, the TRON currency, is available for purchase on Binance and other cryptocurrency exchanges. TRON’s future goals include creating decentralized gaming platforms.

Burstcoin used Turing-complete intelligent contracts to create NFTs and employ them in video games for the first time. Since 2014, it has been operating ‘Proof of Capacity’ rather than ‘Proof of Work,’ making it one of the most sustainable cryptocurrencies. Burstcoin rewards ‘miners’ for utilizing storage space to ‘mine.’ So, a computer with a 1 TB hard drive mining Burst requires hardly more energy than an idle PC. ASIC or GPU mining using a ‘Proof of Work’ method is significantly less efficient. Burst is traded on Bittrex, STEX, and other cryptocurrency exchanges.

MHC mining and forging are made possible via MetaHash, a distributed system with no transaction fees. The MetaHash project includes TraceChain, MetaApps, and MetaGate, in addition to MHC. TraceChain is a network traffic routing technique. In addition to C++, PHP, and Solidity, MetaApps enables users to create stand-alone, decentralized apps. For third-party application developers, MetaGate is an open-source user interface.

One of Metahash’s advantages is that it is significantly more efficient than pure Proof of Work protocols. Since then, the network has been running on various PoS, addressing concerns that had threatened the network’s decentralization. A network’s integrity is protected by “multi-layered validation” in this system. Rebuilding and redistributing the functions of the network’s key entities may be necessary to neutralize threats when they seem to be corrupted.” It also reduces consensus time by allowing verification and block allocation to take place simultaneously.

Get to Know Cryptocurrencies that are More Eco-Friendly than Bitcoin was originally published in The Capital on Medium, where people are continuing the conversation by highlighting and responding to this story.

More than 30% of Canadians plan to purchase crypto by 2024, says OSC head

So what if Bitcoin price keeps falling! Here is why it’s time to start paying attention