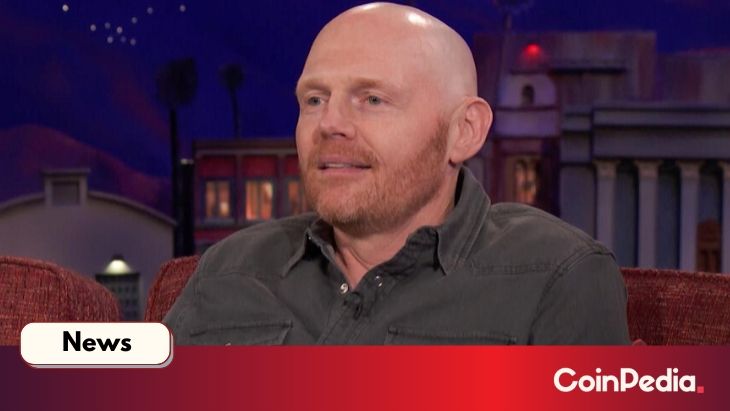 Bitcoin is the face of the modern world. From a pager to facetime today’s generation has seen it all, a human is in an urge to make a better tomorrow, from science to finance this world is growing at a pace of light leaving experts with no words to comment.

Bitcoin and other Cryptocurrency are one such Innovation that questioned the system with its flawless technology.

With the rise in demand for Cryptocurrency across the globe “Bill Burr”, one of the world’s best comedians showed his interest in Bitcoin.

Born on June 10, 1968, in America, Bill Burr or William Frederick Burr is a stand-up comedian, actor, and podcaster. Besides this, he is well known for creating and starring in the Netflix animated sitcom F Is for Family, playing Patrick Kuby in the AMC crime drama series Breaking Bad. He has also hosted the twice-weekly comedy podcast, dubbed “Bill Bert Podcast”

They gathered to “prattle about the fundamentals of currency, bank fugazi, and Bitcoin.” and Pompliano seemingly convinced Bill Burr to consider Bitcoin.

Towards the end of the conversation, Bill Burr revealed his interest to invest in bitcoin. The episode was hosted on the 1st of July. During the podcast, Bill Burr, Bert Kreischer along with Anthony Pompliano discussed “the fundamentals of currency, bank fugazi, and bitcoin,” close to one and half hours.

Pompliano, the co-founder of bitcoin and crypto hedge fund Morgan Creek Digital, briefed the potential factors and benefits of a Bitcoin over the Fiat currency. Continuing the conversation, Pomp said;

“At some point the U.S. dollar isn’t going to be the world’s reserve currency,”, adding that the “previous world reserve currencies have collapsed eventually”.

Unlike money monitored by central banks and governments, Bitcoin is the first cryptocurrency which entered the global market during the 2008 financial crises since then the crypto market has never failed to impress, many experts in the industry are sure the demand for bitcoin will rise.

Anthony believes “In the upcoming decades, Bitcoin will be the world’s reserve currency,”

Pomp went on to explain that the coronavirus pandemic situation has certainly turned up an essential base for why people should look up to Bitcoin.

The fact that he explained how pandemic forced the Federal Reserve to print more US dollars as a means to ‘create a safety cushion for the economy.

He continued making a strong debate, showing the recent statistics of $ 25 trillion national debt of the US and how the Fed’s balance sheet broke $ 6 trillion following that.

On the other side, Pomp said Bitcoin’s supply is limited, there can only be 21 million bitcoins ever exist. He laid emphasis on the limited supply of bitcoin, adding, basically you’re protected from that inflation and the printing of money and all that crazy shit.

“And so what you end up doing is Bitcoin and why we’re so excited about it, there’s a lot of people who call it ‘the people’s money’—or a deflationary type asset. All that means is that no one can print it,” described Pompliano.

The fact is that Bill Burr seems very confident about bitcoin after the podcast. Accordingly, he strongly argues with the Twitter user that trolled Pomp as ‘every bitcoiner’.

In his response to a Twitter user’s post, Bill himself replied that the Interview was amazing. He mentioned that he “was thinking about the possibilities of the dollar going away and having to start from scratch at over 50 years of age.”

And Finally, towards the end of the podcast, Bill said “I’m getting Bitcoin“, which was later posted on twitter by Anthony Pompliano.

It would look even stronger when Bill Burr actually buys bitcoin.!

Hope you find Bill Burr’s Bitcoin Story interesting, feel free to tag us and share this story among your followers and friends.

WBS: Global Blockchain Gurus to Explore the future of Blockchain and Crypto in Asia