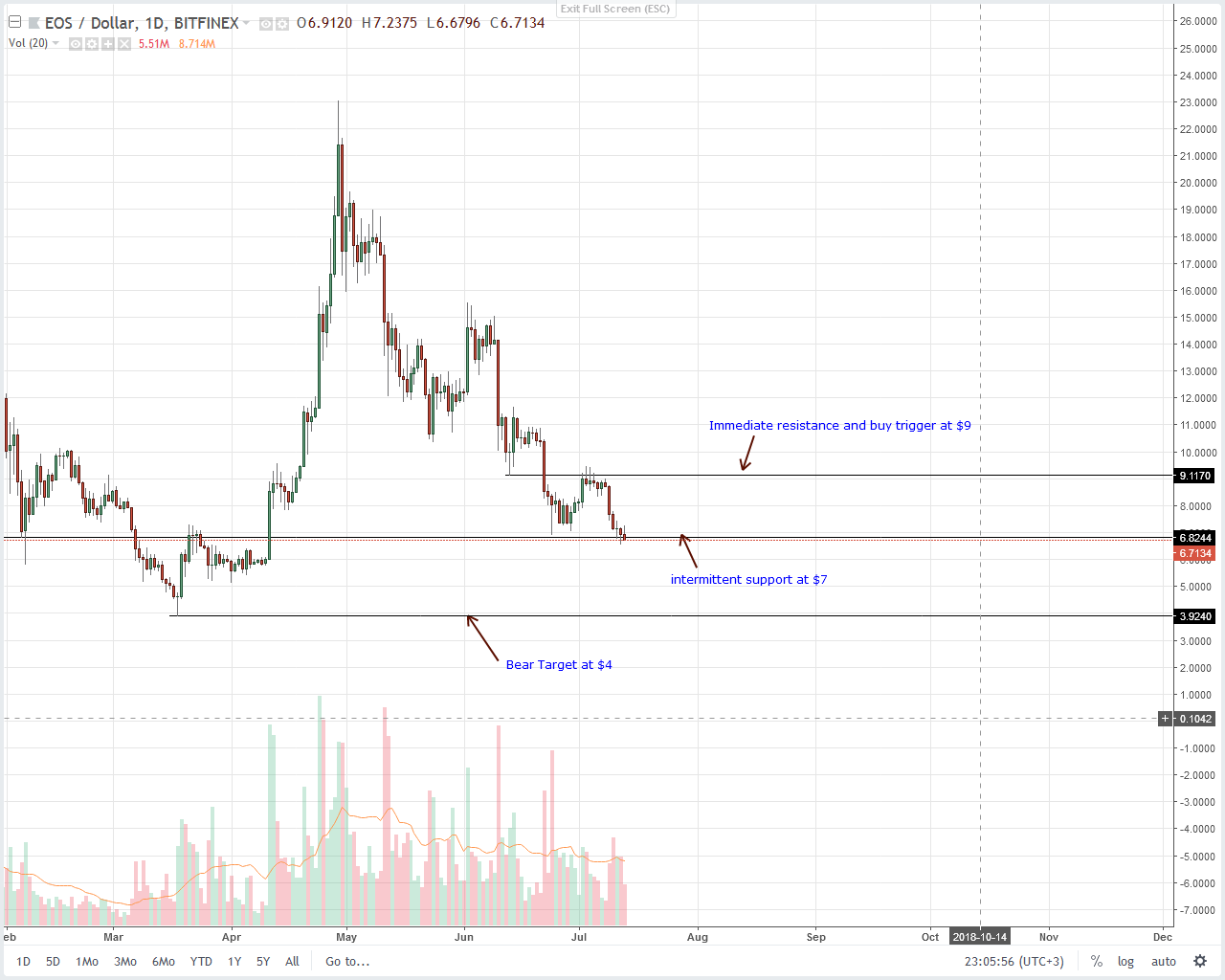 Of all coins, Stellar Lumens performance stands out. It is one of the top performers in the market gaining eight percent in the last day. IOTA is also following suit. While IOTA prices are well balanced and trading above 90 cents-our sell trigger line, any up thrust above $ 1.1 and $ 1.3 would be morale boosting for buyers.

Let’s have a look at these charts:

Everipedia describes itself as the “next generation encyclopedia that is rebuilt for the modern age”. It’s a for-profit organization and a fork of Wikipedia with more than six million articles on its data base. What stands out is that is free from ads and free for everyone to use under the creative common. Everipedia’s IQ tokens are now available at BitFinex.

Everipedia (IQ) has been distributed to Bitfinex users.

We have also enabled trading for IQ tokens against EOS & USD, in what represents the first EOS base pair to be introduced to Bitfinex.https://t.co/lScaA0KU1g pic.twitter.com/CNU9zBx4ce

Following their distribution by BitFinex, IQx-the native token for Everipedia-is now tradable against the USD and EOS. Because of this demand, it’s up 120 percent.

In the last day or so, EOS prices have been shifting between stable to bearish and is down one percent at the time of press. Now, because prices are trading below $ 7, our sell trigger line, my recommendation for traders in the days to come is to sell with every pull back with targets at $ 4 as laid down before. In line with this, safe stops would be at $ 8, that’s right at July 10 highs. 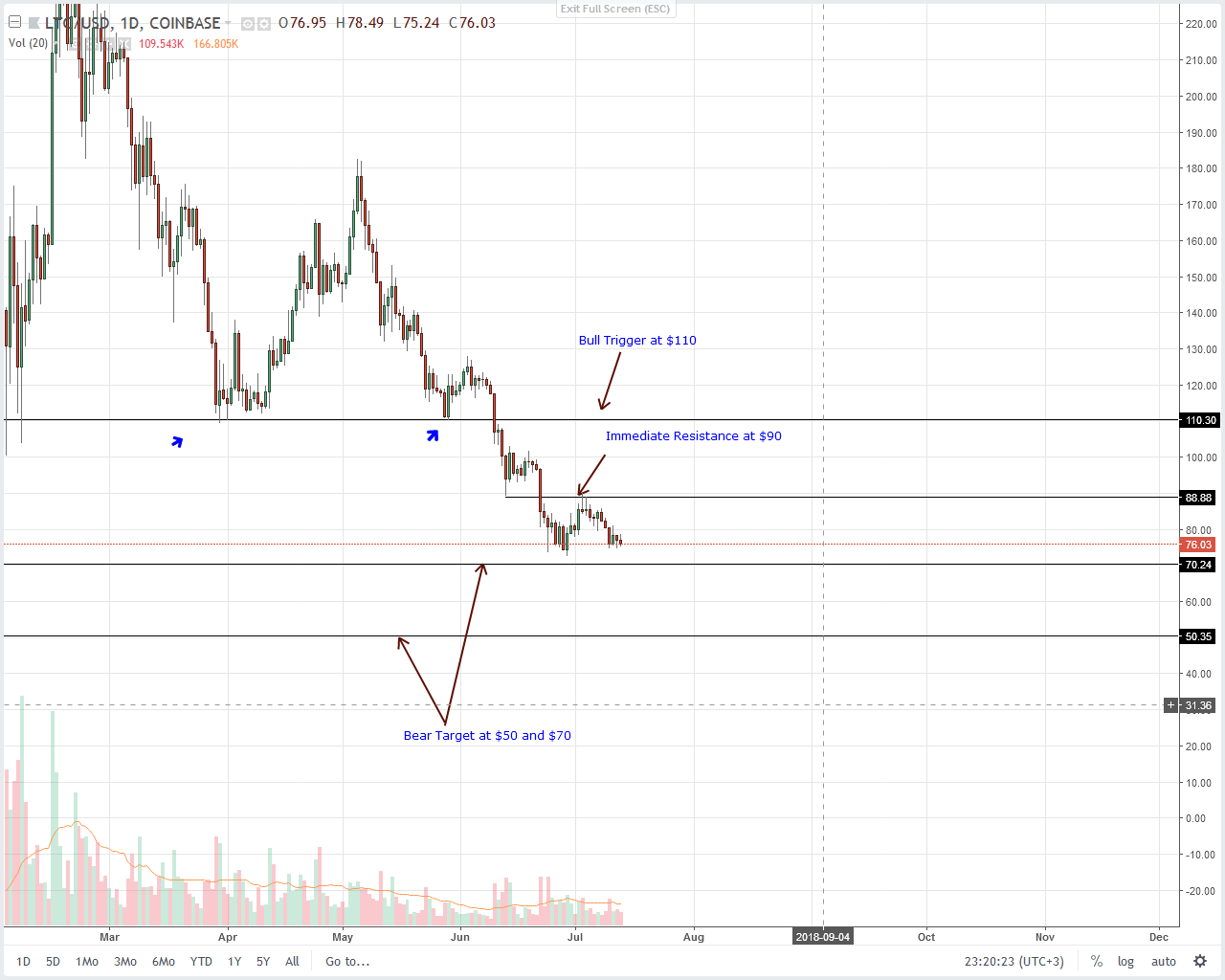 A combination of several fundamental announcements makes Litecoin a desirable buy if not a long term buy-hold. First, news users of Abra-which already has a connection with Litecoin-will in days to come buy Bitcoin using their Master Cards or Visa cards is a big boost for cryptocurrency adoption. While they won’t be the first, it is still positive.

Secondly, 34 Bytes a point of sale designer and distributor has successfully tested and added Litecoin (LTC) to their network. Of course, in their drive-34 Byte motive-to make purchases in cryptocurrency easy, improving user experience is paramount.

Customers would now make purchases in cryptocurrencies and feel like they are making payment using their credit cards.

As before-and we shall hold this position as long as technical formation allows-we remain bearish. And why not, buyers did fail to build on their buy momentum even after those gains on July 11. Instead, sellers are driving lower towards $ 70 and this is despite this one percent appreciation. We suggest selling with stops at $ 90 and targets at $ 50 in line with our previous trade plans. 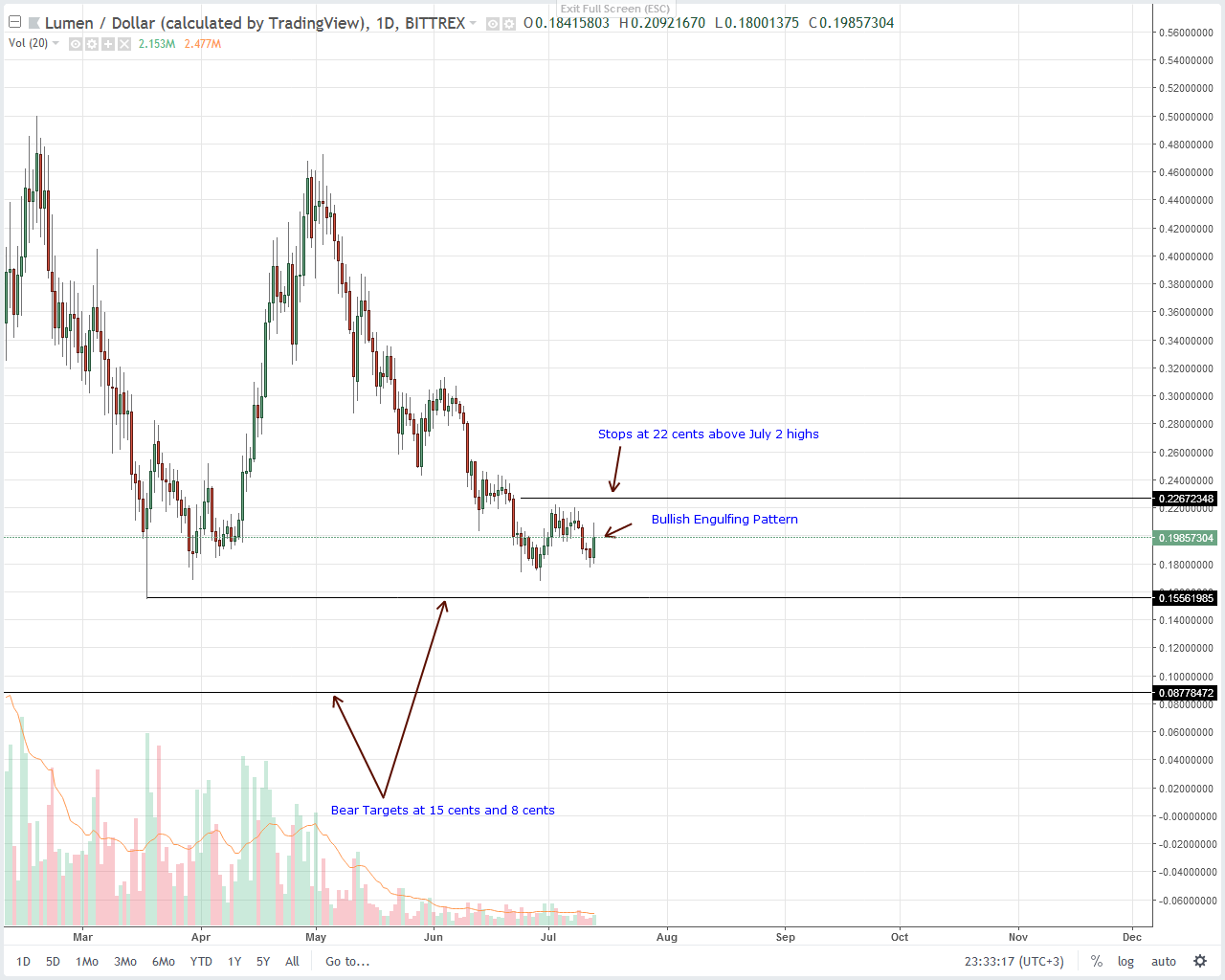 By design, Stellar is meant to be that platform when Fin tech apps and blockchain start ups should strive. This is why Tempo which plans to be this global payment platform will be using XLM in the days to come. The benefits of utilizing XLM are many and we can draw similarities to those of XRP. XLM tags with it cost savings and is fast this is why Tempo say use it for their crypto-fiat trading and Stellar’s DEX to boost their liquidity.

There is this nice bullish engulfing pattern and even though volumes are low, it could possibly be a launch pad for buyers. XLM is up nine percent perhaps buoyed by Tempo news and the best approach here is to wait for gains above 22 cents now that our stops were hit yesterday. Any move above July 2 highs effectively cancels our bearish projection. 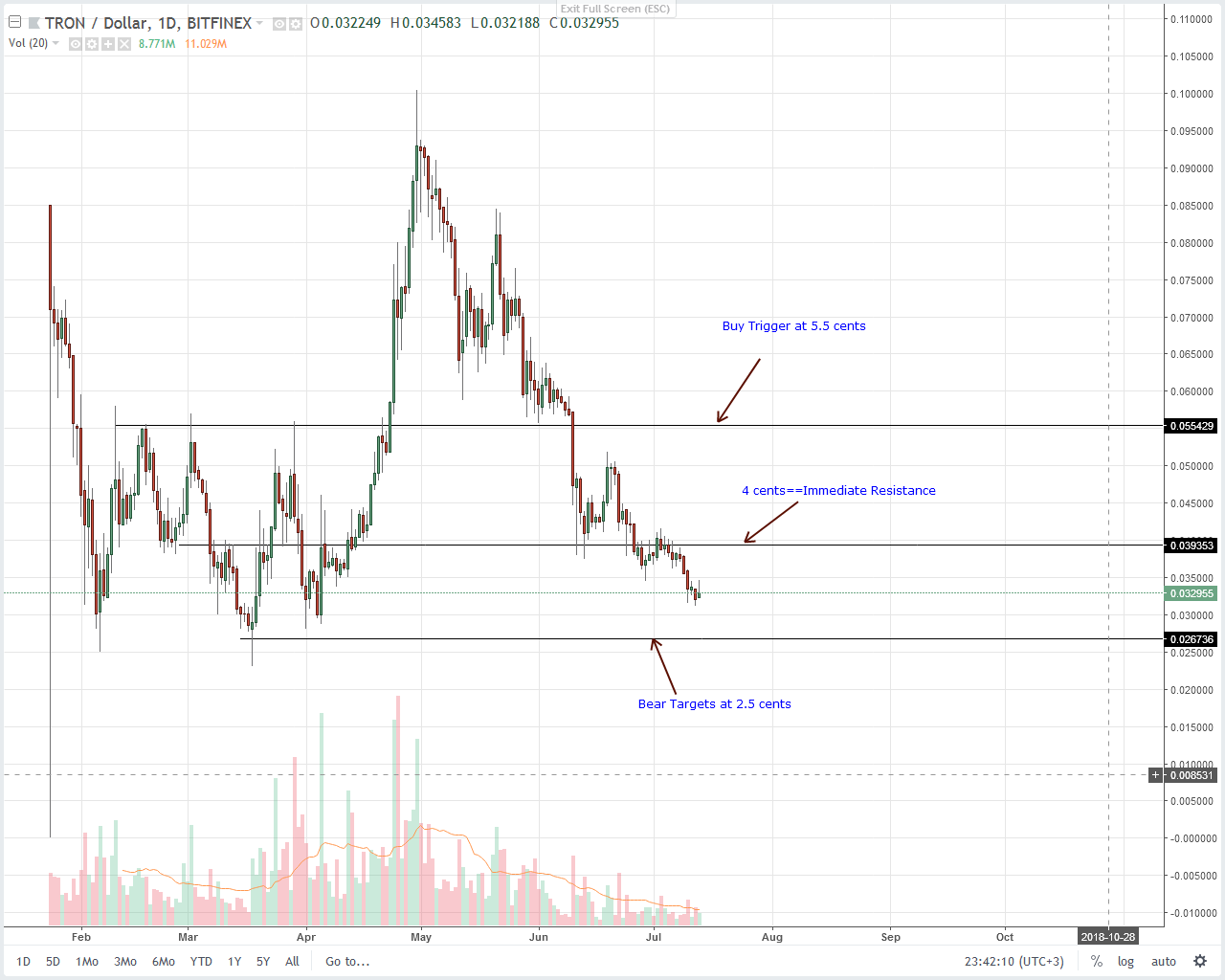 Encouragingly, there are 17 new exchanges that now allow TRX deposit and withdrawal. This is a boost for Tron in general because it will allow holders to vote for their SRs without a hitch.

Secondly, boosting adoption and especially those who don’t like keeping their coins at exchanges, there is a new Tron App specifically for Ledger. Here, users can manage their Tron from Ledger Nano S via Tronscan.

The Tron application is released now, here is the tutorial https://t.co/KNwy5t1Iro

Overly, there is a recovery deep in bear territory. Whether this rejection of lower lows will continue through this week we don’t know but what’s clear is that TRX is up five percent. In my view, I won’t recommend buys until after bull pressure edge past 4 cents cancelling a bear break out pattern. If there is a breach below July 12 lows at 3 cents then traders can continue with their shorts with ideal targets at 2.5 cents. 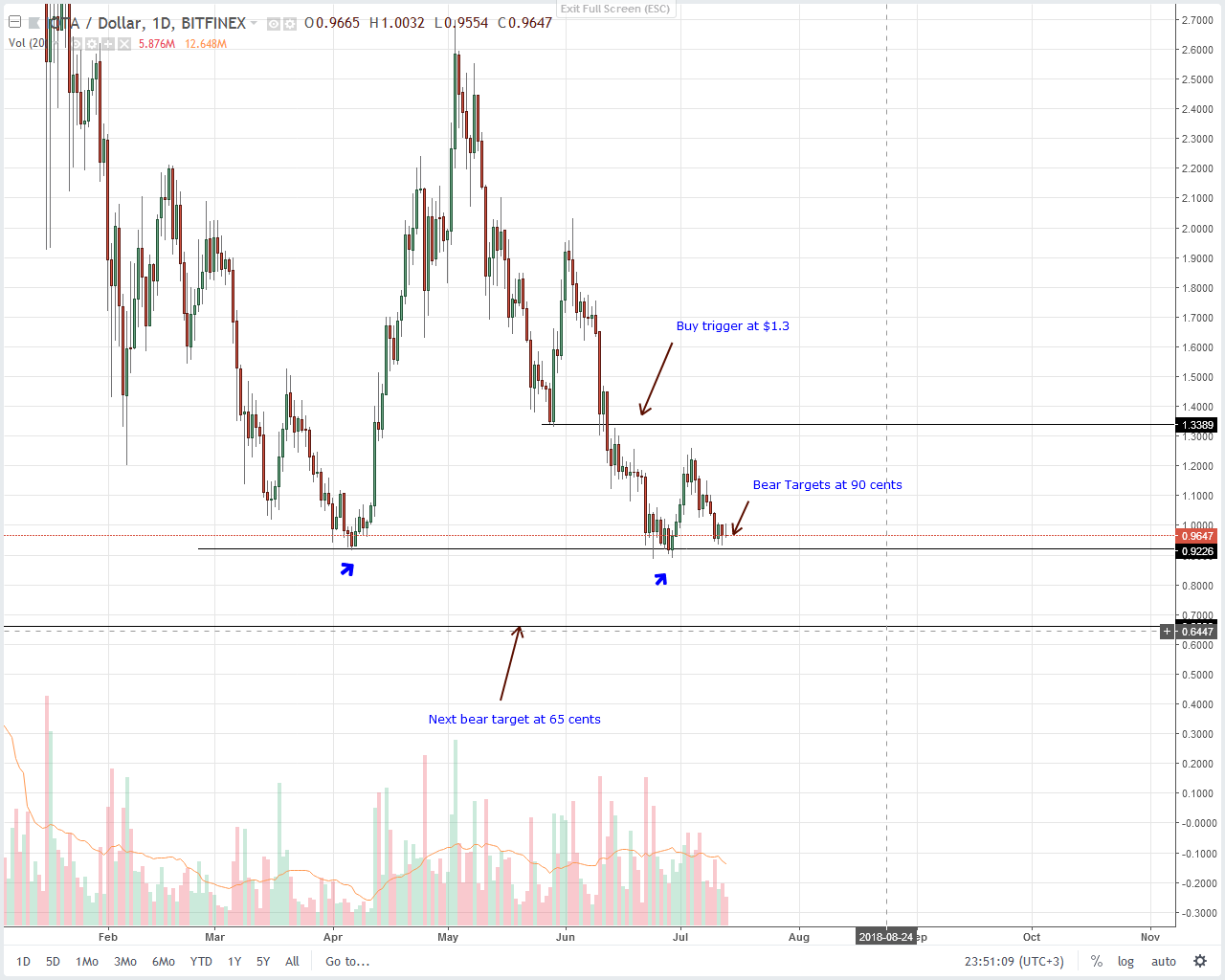 After three days of consolidation, IOTA is yet to make significant progress. IOTA sellers are in charge and to trigger our next bear wave then we must see prices breaching 90 cents. Before then and as spelled in our previous analysis, we remain neutral until after that break below happen. Conversely, any appreciation above $ 1.1 and $ 1.3 cancels this bear move ushering in buyers who might push prices towards May 2018 highs at $ 2.5.

Disclaimer: Views and opinions expressed are those of the author and aren’t investment advice. Trading of any form involves risk and so do your due diligence before making a trading decision.