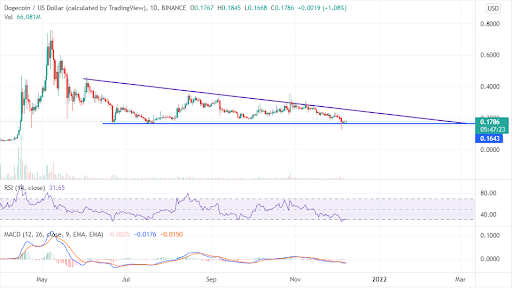 Dogecoin(DOGE) Price Coiling Around Support Levels, Is Another 80% Dump on the Cards? Dogecoin just slipped out of the top 10 cryptocurrency ranking list and appears to have been prepared to slip a couple of ranks more. As no signs of recovery or initiating with recovery is seen with the popular meme coin for quite a long time. And hence revisiting lower lows with not enough volume to breakthrough remains the story of the DOGE price rally in the past couple of months.

The DOGE price has already fallen apart to as low as 80% from its highs earlier this year. Honestly, many altcoins did tremble down heavily but also sustained at certain levels, followed by a trend reversal towards the local resistance. Yet Dogecoin maintains the same narrow trend being unaffected from the bullish trend. The depleting volume along with the token remaining distinct from the trend indicates that the traders may have shifted their focus on some other coin leaving doge behind.

The asset after hovering just above the strong support levels at $ 0.164 for more than 2 months has just revisited these levels. The DOGE price usually bounces on visiting these levels each time and a similar movement is expected yet again. But even though the price rebound from these levels, yet one cannot expect a huge leg up smashing the highs. The reason behind this may be the loosened strength in the rally.

As it can be evedentically seen in the chart, ever since the RSI dipped to lower levels, the DOGE price revisited the lower levels. However, with a flip, the price always failed to mark new highs despite the RSI touching highs. And hence even if the indicator surges high yet the price could still hover around similar levels, struggling to reach $ 0.2 levels.

On the other hand, the MACD for a very long time showcases very little volume in both buying and selling which is a little worrisome. As the drop in volatility rate could kill the rally’s strength and hence only minor trade may continue. Therefore, Dogecoin(DOGE) price collectively may be pretty bearish in the upcoming days. And may undergo yet another 80% dump if it fails to hold and rebound from the current levels.