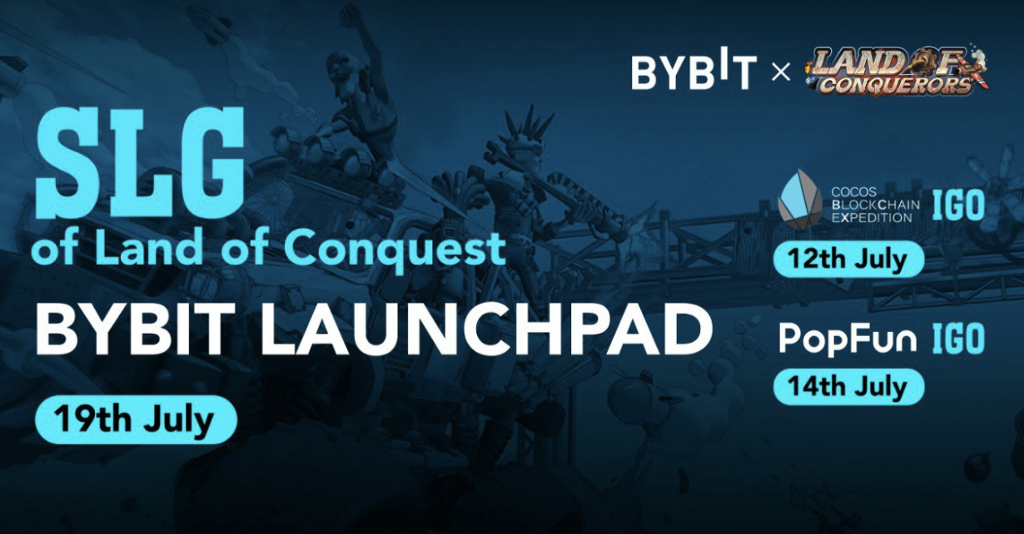 Singapore, July 11th 2022 — Land of Conquest, a much-anticipated blockchain game launching soon in the GameFi space, announced today that its $ SLG governance token will be listed on the Bybit cryptocurrency exchange on July 19th. Token offering events such as whitelisting by lead incubator PopFun will be conducted this week as well as a limited-offering IGO (Initial Game Offering) hosted by Cocos launchpad on July 12th.

“We are very pleased to be listing $ SLG on a global established exchange like Bybit,” said Land of Conquest game producer Amore Wong. “It has been hard work building ‘Land of Conquest’ over the past months and we are happy to announce that alpha testing will begin at the end of July, with a closed beta coming in August. Funds raised through the Cocos IGO and PopFun whitelisting will also help us launch the final game very soon. Seeing the massive support we have already received, we expect Land of Conquest to be extremely well-received.”

$ SLG is the Land of Conquest governance token and can be used for making NFT transactions in the game’s SLG market. In addition to the token purchase options on Bybit, Cocos and PopFun, $ SLG can also be earned in-game through play. Only 1 billion $ SLG will ever be issued, making it a deflationary token.

Bybit is giving full support to Land of Conquest in the lead-up to its token listing. On July 15th, the Bybit NFT Marketplace will sell NFT mystery boxes powered by Land of Conquest as part of the promotional initiative to increase awareness about the project.

Land of Conquest: Next-Gen GameFi for Gamers who want to have FUN

Land of Conquest is an upcoming MMOSLG game set in an apocalyptic wasteland. As an MMO simulation game, the game offers players many exciting ways to interact, ranging from the production of bases and resources to training heroes up for challenging PvE and PvP battles.

The game features three kinds of NFTs for players to buy and earn: land, heroes and fortress-strengthening mechs. It also features a free-to-play option that gives new players a chance to battle against NPCs and help harvest resources for land-owners, while hero NFT-holders can enjoy exciting PvP matches.

In addition to the on-chain SLG token, Land of Conquest will also feature two other kinds of tokens. $ XTAL is a play-to-earn reward currency that should be familiar to all experienced GameFi players, while LOC GOLD is an in-game currency available for purchase with USDT that makes it easier for traditional gamers to get ahead in the game.

In addition to its enthusiastic social media community of over 97,000 followers, Land of Conquest has garnered support from a number of investors, including PopFun, Cocos, Mirana Ventures, New Start Ventures, CCV, C2, NGC Ventures, K300 Venture and CryptoPhd.

A GameFi incubator launched early this year, PopFun is leading incubation efforts for the Land of Conquest game development and providing a wide range of marketing support for the game launch. This week PopFun will release a limited offering of $ SLG for whitelisted users. Interested parties should follow PopFun’s Twitter channel for the latest announcements.

“Land of Conquest is our incubator’s third and largest support project to date and we are extremely excited to bring this game to market,” said Ray Lee, founder of PopFun. “There is currently a massive demand in the GameFi space for entertaining play-to-earn games. Too many P2E games are overly focused on the financial aspect, leaving players bored and unengaged. We aim to put a stop to that with ‘Land of Conquest’.”

Experienced gamers are invited to participate in Land of Conquest’s alpha and beta testing events which should begin at the end of July. Stay tuned for more information on this and more ‘Land of Conquest’ announcements by following their Twitter page as well as Bybit’s Twitter page for the newest updates on the SLG token listing and NFT mystery boxes.

About Land of Conquest

Land of Conquest is a play-to-earn blockchain game that offers the best battle simulation gaming experience in the crypto industry. Set in an apocalyptic wasteland, Land of Conquest allows players to build their own bases, produce resources, train heroes and battle against hostile NPCs and other players’ characters. The game offers a number of different kinds of NFTs and play-styles, including a unique free-to-play option that ensures enjoyable and strategic interactions between free and paid players. The ‘Land of Conquest’ SLG token is listed on Bybit global exchange and the game’s closed beta will launch in August.

Bybit Exchange to list $ SLG GameFi Token Land of Conquest following Whitelisting and IGO was originally published in The Capital on Medium, where people are continuing the conversation by highlighting and responding to this story.