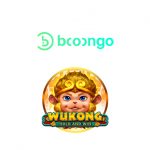 Booongo Enters The Land Of The Monkey King in Wukong: Hold and Win

Booongo, the global online slots developer, has unveiled another Asian adventure in its newest Hold and Win release, Wukong.

With the legendary Monkey King himself gracing the reels, Wukong’s artfully crafted 5×3 grid has 25 paylines and incorporates the popular mechanic that is enjoyed by Booongo fans worldwide.

Three Heavenly Arches that land on reels 2,3 and 4, tiggers the Free Spins mode, awarding players with 8 spins. Additional free spins are granted should three more Arches appear during the Bonus Mode. Throughout Free Spins, only high paying symbols appear on the reels to provide a greater win potential.

Six or more Bonus gems will activate the Hold and Win mode, with players granted three respins to try and find as many gems as possible. If a gem lands on the reels, the spins count will reset. If all 15 reel spots are filled, the Grand Jackpot of a staggering 5,000x is awarded.

Mystery symbols can also land on the reels during the Bonus game, which will reveal themselves to be either a Mini, Minor or Major jackpot, with all cash totals accumulated at the end of the round.

Yuriy Muratov, Head of Account Management and Business Development at Booongo, said: “Wukong sees players enter the realm of the mythical Monkey King in search for great riches. With both a Free Spins and Respins mode, there’s something for everyone in this far-eastern adventure and we can’t wait to see how players respond.

“With a massive 5,000x Grand Jackpot, there’s untold gems for brave travellers to discover in the land of Wukong!”

The post Booongo Enters The Land Of The Monkey King in Wukong: Hold and Win appeared first on FortuneZ.