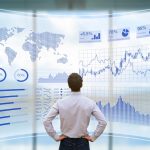 A popular analyst has suggested that bitcoin is showing signs it will continue its uptrend to reach a new record high above $ 50,000, based on technical indicators including moving averages and candlestick patterns.

The analyst, TradingShot, has published a recent note analyzing the BTC/USD trading pair and pointing out its trend suggests it will soon hit $ 50,000, as the bullish trend that saw bitcoin’s price move from $ 11,000 in October of last year to a new near $ 42,000 all-time high could still be ongoing.

TradingShot pointed to the trading pair’s candlestick patterns in conjunction with its moving averages (MA) to identify potential reversal and continuation patterns on BTC’s price, as Bitcoinist reports. Previous patterns show that BTC broke above a descending trendline to only retest it later, before testing its 50-period moving average as support.

Recent price actions appear to be similar, the analyst implied, showing that BTC’s price broke above a “lower high zone” but was rejected at the top of an emerging channel, and pulled back towards its 4-hour 50-period moving average. TradingShot added: “Since the Lower Highs Zone broke, will the 4H MA50 or MA200 be enough to accumulate new buyers? If so, then this may be the last confirmation we need before the 50k test.”

New buyers are believed to be coming in. According to Tesla’s latest annual report (on Form 10-K), which has been filed with the U.S. Securities and Exchange Commission (SEC), the electric car maker has already invested $ 1.5 billion in Bitcoin.

After Tesla’s announcement, the price of bitcoin surged to a new all-time high above $ 44,300 before the cryptocurrency’s price corrected. It’s now trading at $ 42,770 after moving up nearly 13% in only 24 hours.

The CEO of CryptoQuant, Ki Young Ju, noted massive outflows out of Coinbase close to Tesla’s announcement, which could suggest the firm bought BTC through Coinbase.

It seems like lots of OTC deals are on-going lately.$ BTC pic.twitter.com/rAZlEtzO4t

Large outflows from Coinbase are believed to be from institutions and other large players buying up coins in over-the-counter deals, and then sending them to cold storage. Ki Young Ju, it’s worth noting, has said these outflows are the “strongest bullish signal,” and pointed out he has “no doubt” bitcoin will hit $ 100,000 this year.