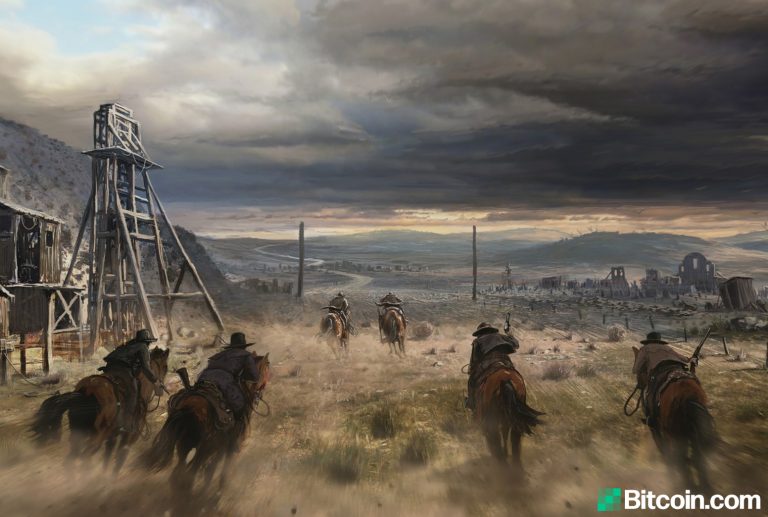 The city of Rockdale, Texas is attracting attention again, similar to the interest the region saw back in the fifties when the Alcoa aluminum smelting facility set up shop. These days, Rockdale’s change is due to the influx of bitcoin miners coming to town from all around the world. A Frankfurt-based operation called Whinstone Inc., recently revealed plans to build a 100-acre mining facility in Rockdale, and so far the plant has attracted clients like SBI Holdings and GMO Internet.

On Tuesday, reports detailed that two of Japan’s major financial firms have opted to join the Northern Bitcoin AG subsidiary Whinstone Inc., mining bitcoin in the small city of Rockdale, Texas. Financial columnists Eyk Henning and Vanessa Dezem disclosed that “people familiar with the matter” explained that Whinstone’s operation has attracted SBI Holdings and GMO Internet. Whinstone announced on November 1 that the firm acquired a 100-acre site that will be used to power 300 Megawatts (MW) of mining rigs.

Moreover, Whinstone is confident its power will be at full capacity by Q4 2020 with a whopping 1 Gigawatt (GW) of processing power. The mine has the potential to be the world’s largest bitcoin data facility and Whinstone is renting out capacity to interested clients. After the SBI and GMO news broke, senior commodity strategist Mike McGlone claimed the public will see more institutional investors join the mining race.

“Bitcoin is attracting more institutional investors and with the notion of limited supply and mass adoption,” McGlone stressed.

Dezem and Henning’s source highlighted that the Whinstone operation wants to have the facility fully operated by significant investors. The news from SBI and GMO follows the recent cryptocurrency market spikes that started a few days after the new year. Both SBI and GMO have been involved with the crypto industry for quite some time. For instance, on December 20, SBI partnered with Germany’s second-largest stock exchange Boerse Stuttgart Group in order to grow crypto services in Europe and Asia. SBI also has a slew of other crypto-related subsidiaries like its own digital asset exchange.

In 2018, the Japanese internet giant GMO was known for developing and manufacturing bitcoin mining rigs. However, the company ran into some issues with profits, and in November 2018 GMO postponed the shipment of two types of GMO 7nm equipped bitcoin mining rigs and issued refunds as well. The following month, GMO announced it would stop developing and manufacturing mining rigs, but would still mine bitcoin in-house. Since then, GMO Internet has been out of the limelight as far as the crypto industry is concerned up until the recent partnership with Whinstone’s mine in Texas.

Whinstone and its corporate partners will be joining the Chinese mining giant Bitmain which has also set up shop in Rockdale, Texas. The firm started looking into the Rockdale site back in 2018 and the crypto winter set operations back. However, in mid-October Bitmain and DMG Blockchain Solutions revealed the launch of the 25MW facility at the old aluminum smelting facility’s industrial park. Bitmain hopes to max out capacity at the Texas mining facility by accumulating 300MW of processing power.

The city of Rockdale with a population of 5,851 people has dealt with an influx of industrial entrepreneurs for decades as the region was once known as the “town where it rains money.” Before the internationally-based bitcoin miners came, in 1952 the Saturday Evening Post featured the city of Rockdale when the Alcoa aluminum smelting factory came to town. Since the article was published, Rockdale quickly changed from being an agriculturally predominant region to a very industrialized city. At the time, Rockdale doubled in population, but in 2008 smelting operations were stopped at the Alcoa plant and the city’s economy dropped significantly. This was until the bitcoin miners showed up in early 2018 and showed interest in mining crypto in the city. Now Rockdale and the acres of land and warehouses left empty by Alcoa have become a hotspot for making it rain digital money. “200 new jobs, in addition to an estimated 51 spin-off jobs, are significant for the District,” said Dr. John Weed III, president of the Rockdale MDD during the Whinstone bitcoin mine opening ceremony.

Disclaimer: This article is for informational purposes only. Readers should do their own due diligence before taking any actions related to the subject matter written above. Neither the company nor the author is responsible, directly or indirectly, for any damage or loss caused or alleged to be caused by or in connection with the use of or reliance on any ideas, software, concepts, content, goods or services mentioned in this article.