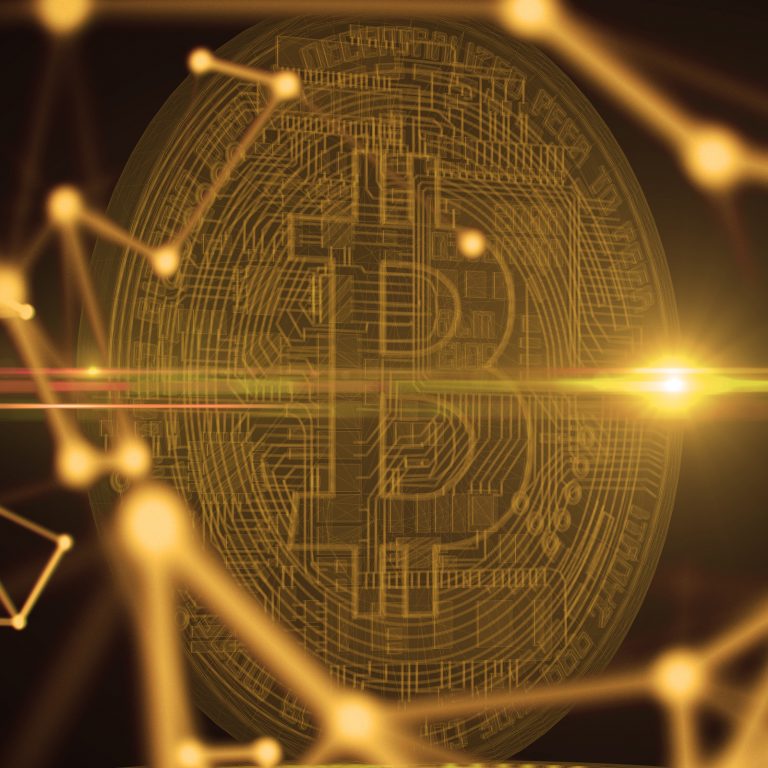 There’s been a lot happening within the Bitcoin Cash (BCH) ecosystem over the last week as far as development and upcoming announcements concerning the future of BCH. Further, the network has been seeing a lot more activity lately with transactions stemming from stress test experiments in preparation for September 1. This week the BCH community mostly discussed the recent disagreements between the Bitcoin ABC and Nchain development teams.

Bitcoin cash markets, like many other cryptocurrencies, seem to be on the mend as price values have seen some upswings in recent days. At press time the decentralized cryptocurrency is averaging $ 532 USD per BCH across global exchanges. BCH holds the fourth largest market capitalization at around $ 9.2B today. Bitcoin cash trade volumes are around $ 298M with the asset capturing the fifth highest trade volume on August 24. The top five exchanges swapping the most BCH today includes Binance, Coinex, Okex, Hitbtc, and Huobi. Tether (USDT) currently captures 49 percent of BCH trades followed by BTC (39%), USD (5.5%), QC (1.8%), and ETH (1.2%). 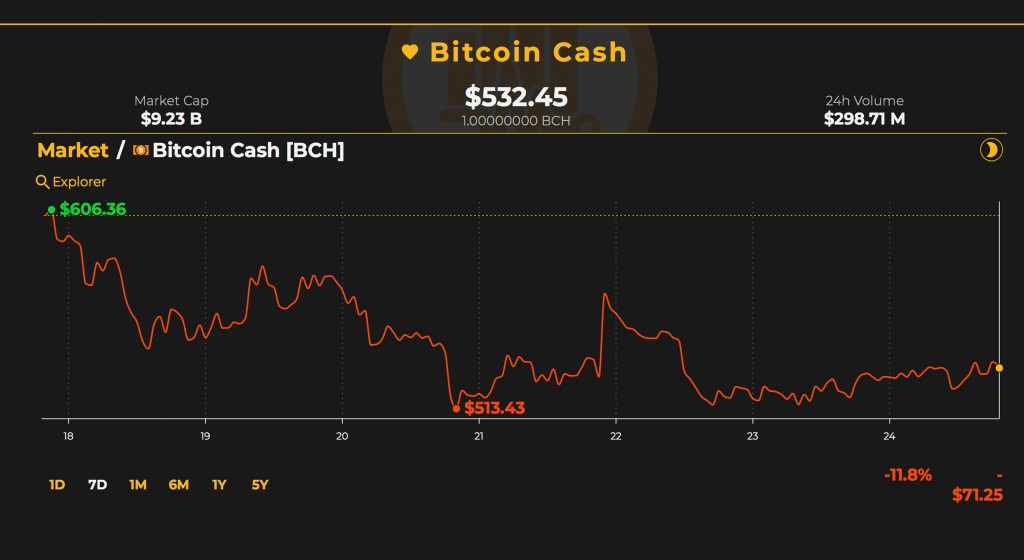 The Debate Over Upgrade Features

Besides the price, there’s been a lot going on this week and people have been heavily discussing this coming November’s BCH protocol changes. Earlier this week we mentioned the contention between the recently announced Bitcoin SV full node client and the newly published Bitcoin ABC 0.18.0 codebase. The issue at hand is that both clients want two different upgrade features to be added this November, and if they remain indifferent when the fork comes closer, BCH could face a chain split. Following the initial arguments, Bitcoin Unlimited revealed they would incorporate both client’s upgrades so miners can vote on which features they want out of all the choices. 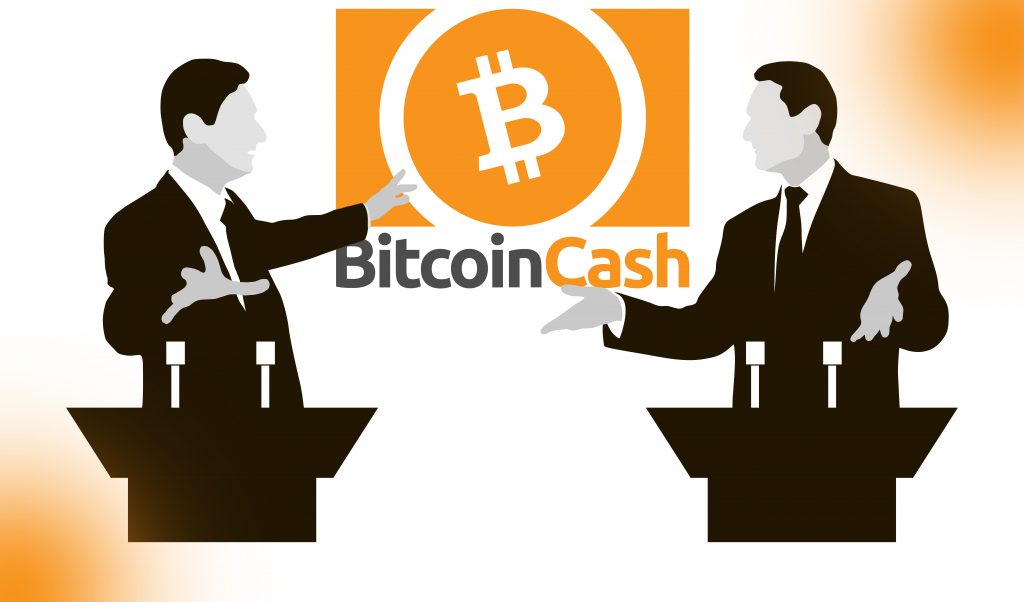 Bitcoin ABC has also addressed the community with a letter called “The Bitcoin ABC Vision.” The ABC development team says they want the world to have sound money that can be used by anyone and the recent release of version 0.18.0 is the latest step towards that path. The team has detailed they believe BCH proponents should focus on zero-confirmation transactions, implementing technical measures to enable massive on-chain scaling, and improving fungibility. The team has also published a diagram that explains in a visual way some of the suggested plans and features they believe “would make a solid roadmap for Bitcoin Cash.” The recent post written by the Bitcoin ABC development team can be read in its entirety here. 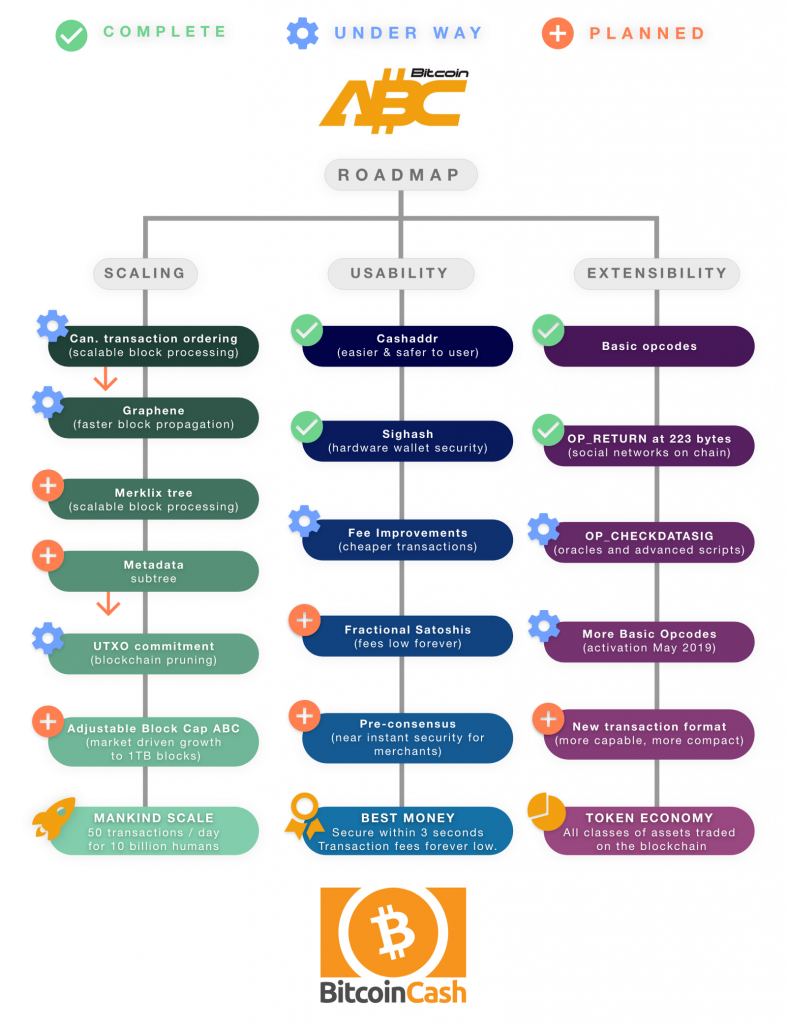 The bcash full node implementation created by the Purse.io and bcoin developers have revealed on August 24 that a new release will be launched soon. Purse.io unveiled the bcash full node client this past May the same time the firm added native BCH support to the company’s marketplace. “Bcash 1.1.0 will include OP_CHECKDATASIG and canonical transaction ordering — Release coming soon,” explains the development team on Friday. 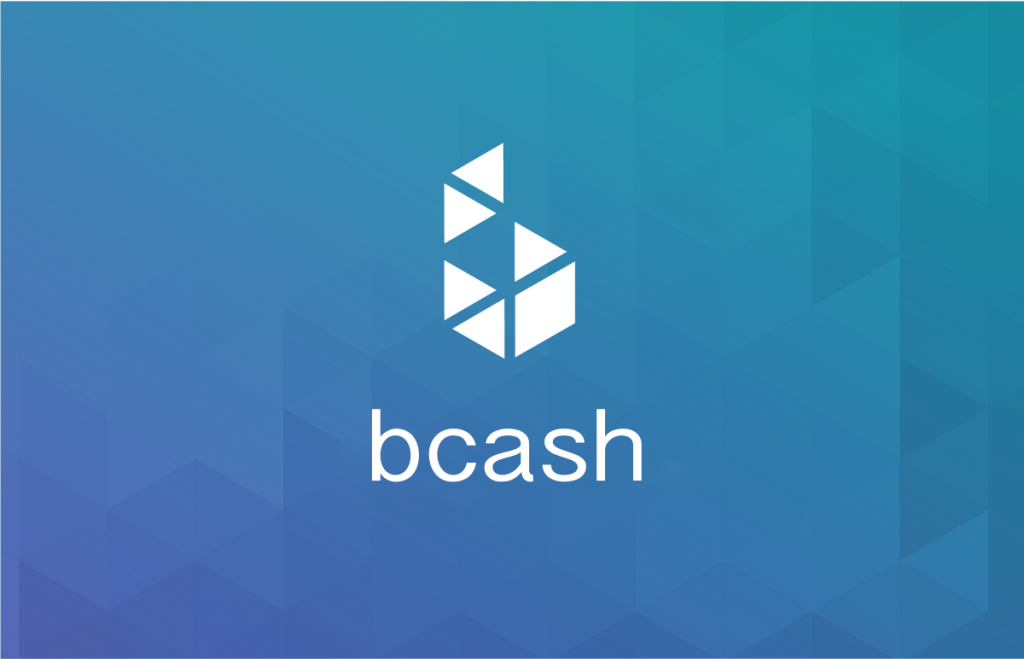 Bitcoin Cash is Open to More Merchants This Week

The BCH community was very pleased to hear that Coinbase Commerce (CC) has added bitcoin cash support for its non-custodial merchant acceptance system. Essentially CC allows for payment modules with Opencart, Woocommerce, Shopify, Magento, and Prestashop exposing 2.7M merchants to BCH. Then the payment processing platform Coppay who has merchants located in the Baltic states of Lithuania, Latvia, Estonia, and now in Portugal, supports bitcoin cash settlement for all 52 Coppay merchants.

Overall there’s been so much going on this week its been awfully hard to keep up with all the action taking place in the BCH environment. News.Bitcoin.com tested two new BCH-powered token creation projects (Colored Coins Wallet & SLP) and created our own tokens. Further, we looked into Recursive Smelting and the Bitcoin Token concepts; two more token projects using BCH that plan to launch soon. Then there was the odd announcement from the curious character Cobra who plans on launching a BCH full node client called the ‘Cobra Client.’ Nevertheless, with all the craziness happening within the crypto-space there’s one thing we can all be thankful for — There’s truly never a dull day in Bitcoin-land.

What do you think about everything happening within the Bitcoin Cash ecosystem this week? Let us know what you think in the comment section below.