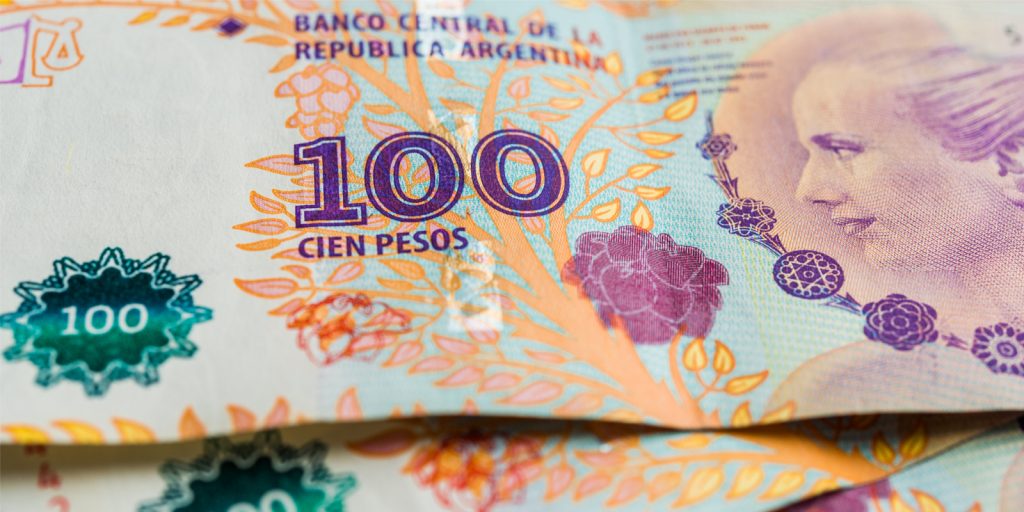 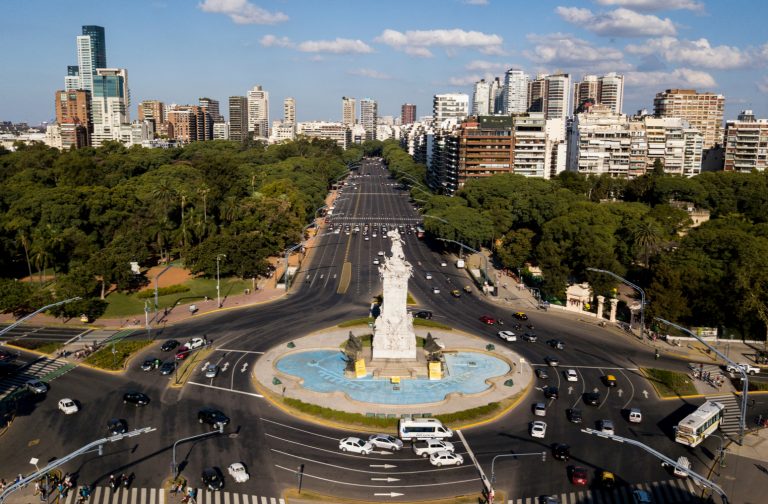 Whenever bitcoin experiences a sharp drop or volatility, mainstream media analysts jump to declare that cryptocurrency isn’t stable enough to be considered money. The double-digit crash of the Argentine peso in one day, simply due to an election in the country, can be said to prove the same about fiat.

On Monday Argentina’s peso currency dropped over 30% in value to a record low of 65 pesos per 1 U.S. dollar. The country’s central bank intervened in the foreign exchange market, using its reserves to prop up the peso, but it still ended the day around 15% down. At the same time, the Argentine equity markets were doing even worse, with the country’s benchmark S&P Merval Index losing almost half its value in dollar terms. This was the worst daily performance by any stock market in the world for the past three decades and only the second worst in the last 70 years.

In case you missed the news, don’t worry, no foreign power has declared war on Argentina, nor has Buenos Aires been hit by a giant meteor. Instead, the event that triggered such a major financial crisis, with people seeing so much of their life’s savings vanishing into thin air overnight, was just a routine election. On Sunday there was a primary vote that signaled that the current politician in charge of the government might be replaced by another one in a few months, which was enough to send the markets tumbling in historic proportions.

Looking at the details of the elections that spooked the markets and led to the collapse of the Argentine peso shows that there is room for some concern. The current president of the country, Mauricio Macri, is at least perceived to have tried to fix some of the structural problems of the local economy, even if his detractors can say that he has failed in doing so. His opposition, on the other hand, the Peronist Alberto Fernández and former president Cristina Fernández de Kirchner, are considered to be left wing populists who could set the country back with disastrous policies that will wreck Argentina’s economy once more. Regardless of whether these perceptions are true, the fact is that enough investors hold the news that the opposition might assume control of the government from Macri to be a serious threat to stability.

It is important to note that Argentina is not some small and inconsequential banana republic. In fact, it is the second largest economy in South America and even a member in the G20 group of major economies. It also inhabits a vast land rich in natural resources. Unfortunately, Argentina is also a common example in economic textbooks on how government mismanagement can destroy economies as it was once one of the richest countries in the world in terms of GDP per capita, at the start of the previous century, but has greatly deteriorated in relative terms over the subsequent decades. 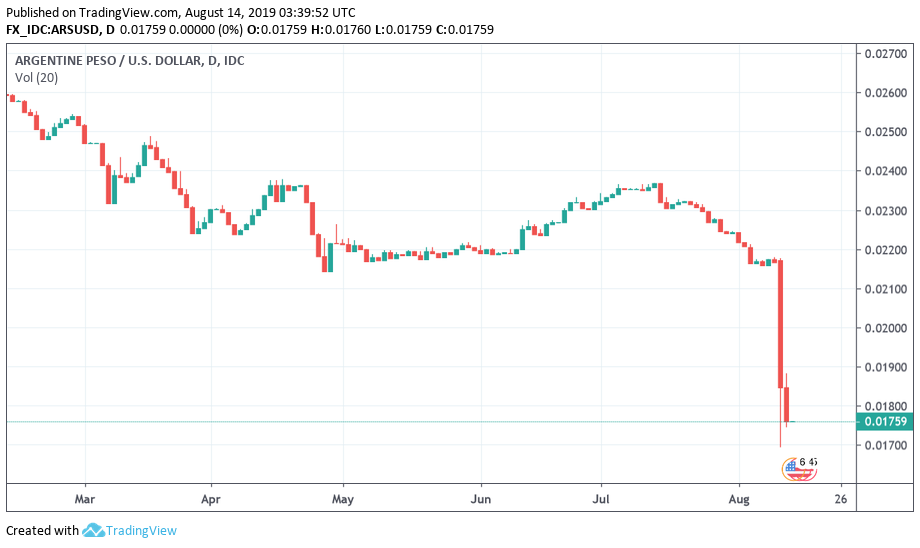 The country has often fallen into financial crises and the people of Argentina have suffered from several severe recessions in recent memory. One of the persistent ills of the economy is very high inflation and the government even had to resort to redenomination, cutting zeros off the fiat currency, four times between 1970 to 1992 alone. This has remained true also in recent years, as in August 2013 one US dollar was exchanged for less than six Argentine pesos and today is worth about 10 times as much.

In 2001 the government of Argentina defaulted on its bonds, which cut the country off from the international financial market for years and caused a lasting economic crisis whose impact the people will not soon forget. Now the country might be at the start of another such calamity, with Argentinians again seeing their peso savings crashing to new lows.

Who Can You Trust?

Argentina of course isn’t the only country that is suffering from high inflation of its fiat currency. Two very notable examples of countries suffering from hyperinflation are Zimbabwe and Venezuela. In 2009, the Zimbabwe dollar set a world record for inflation, estimated to be in the billions of percent, with even the highest notes of 100 trillion dollars not worth enough to buy a single loaf of bread. In 2018 the Venezuelan government removed five zeros off its fiat, making the new “sovereign bolivar” worth 100,000 times the older bolivar which became basically useless as money. However, it shouldn’t be understood that these are the only countries to suffer from inflation. In fact, all fiat currencies suffer from inflation; it is merely a matter of degrees between the extreme cases and the average. 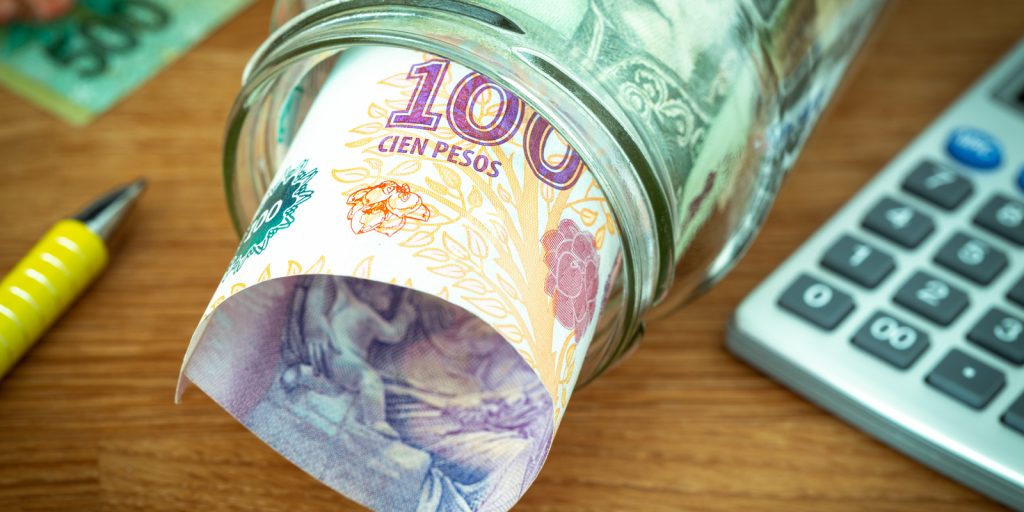 If you think that what happened with the peso can never happen with the U.S. dollar, this demands wholly trusting the American government to never mismanage its economic affairs to this extent. It means that you need to trust American politicians to always look beyond their own short-term incentives to weaken the currency to pump artificial growth ahead of elections or to print new money to buy votes. And it means that you need to trust that the Federal Reserve will always be willing and able to protect the USD from all external threats. Right now, with an international currency war going on, none of these seem to be set in stone.

The need to trust governments not to debase their fiat has always been a concern. It is why some people try to hamper government control of money by asking to return to a system like the gold standard where there is a natural limitation on the currency. However, in such a system you still need to trust the central bank to hold as much gold as it claims. Even in ancient times, those controlling the mints often diluted the percentage of precious metals in their coins, thus causing inflation. Cryptocurrency tries to overcome these problems by removing the need to trust any centralized entity, instead promising to base the value of your money on cold, hard math.

Do you think that the situation in Argentina proves governments shouldn’t control money? Share your thoughts in the comments section below.