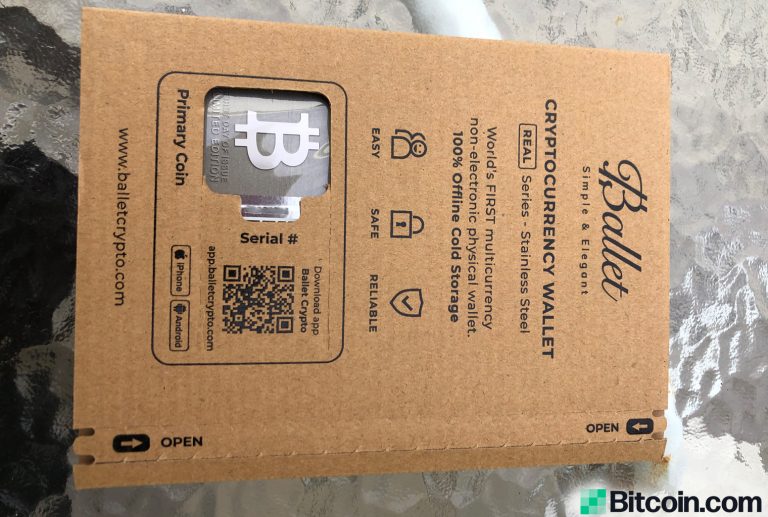 Last September, Bobby Lee, the former CEO of China’s first cryptocurrency exchange BTCC revealed his new business venture Ballet, a non-electronic crypto wallet solution that offers multi-currency support. During the North American Bitcoin Conference Miami, all the attendees got a single Ballet crypto card and news.Bitcoin.com decided to test the product to show our readers how it works. Our newsdesk also spoke with Bobby Lee during the event and he explained that he leveraged his prior experience working as a coin maker for BTCC’s physical bitcoin mint and he’s extremely passionate about the new Ballet product.

Also read: How to Create Custom SLP Tokens With the Bitcoin.com Mint

“The [Ballet] project is one year in the making,” Lee told our newsdesk. “I sold my last company BTCC two years ago. As you may already know, I was the cofounder and CEO of BTCC, we were the very first bitcoin exchange in China launched in 2011 and at one point we also became the world’s largest exchange by trade volume. During that time, I also created physical bitcoins called BTCC Mint and I was a coinmaker from 2016 to 2018. At that time we made a series of coins, but then we decided to close the business. When I was a coin maker for those years, during that time I made over 30,000 coins.” Lee explained that the BTCC Mint coins were pre-loaded and as a coin maker he managed the private keys and “got a lot of experience.”

“None of those coins have ever been hacked or stolen and the reason I know it will never happen is because I deleted the private keys,” Lee stressed. “I had really good operational security (opsec) by deleting all the private keys for the BTCC Mint and those coins are collector’s items today. All of those coins came from miners, directly from the coinbase to the physical coin.”

As soon as the private key is printed on the Ballet card, private keys are deleted. Lee emphasized to our newsdesk that if you lose a card, you can’t come to him or his company for the private key and you would be basically “out of luck.” Ballet cards are made the same way Casascius physical bitcoins were made by Mike Caldwell, Lee remarked, and just like Caldwell Lee is putting his name behind the stainless steel Ballet cards. “What I realized over the last nine years being involved with cryptocurrency, is that crypto is too hard for normal people,” Lee said. “Stuff like private key management, the generation of private keys, wallets, security passwords and passphrases, and some have firmware upgrades. It’s just too darn hard.” Lee further added:

A lot of my friends and family, I encouraged them to invest in bitcoin in the early years and they’ve done so, but they all left their coins on exchanges, and sometimes they even lose it. Finally last year it clicked, I should take my experience of making physical bitcoins at BTCC Mint and turn that into a generic wallet solution that is multi-currency. 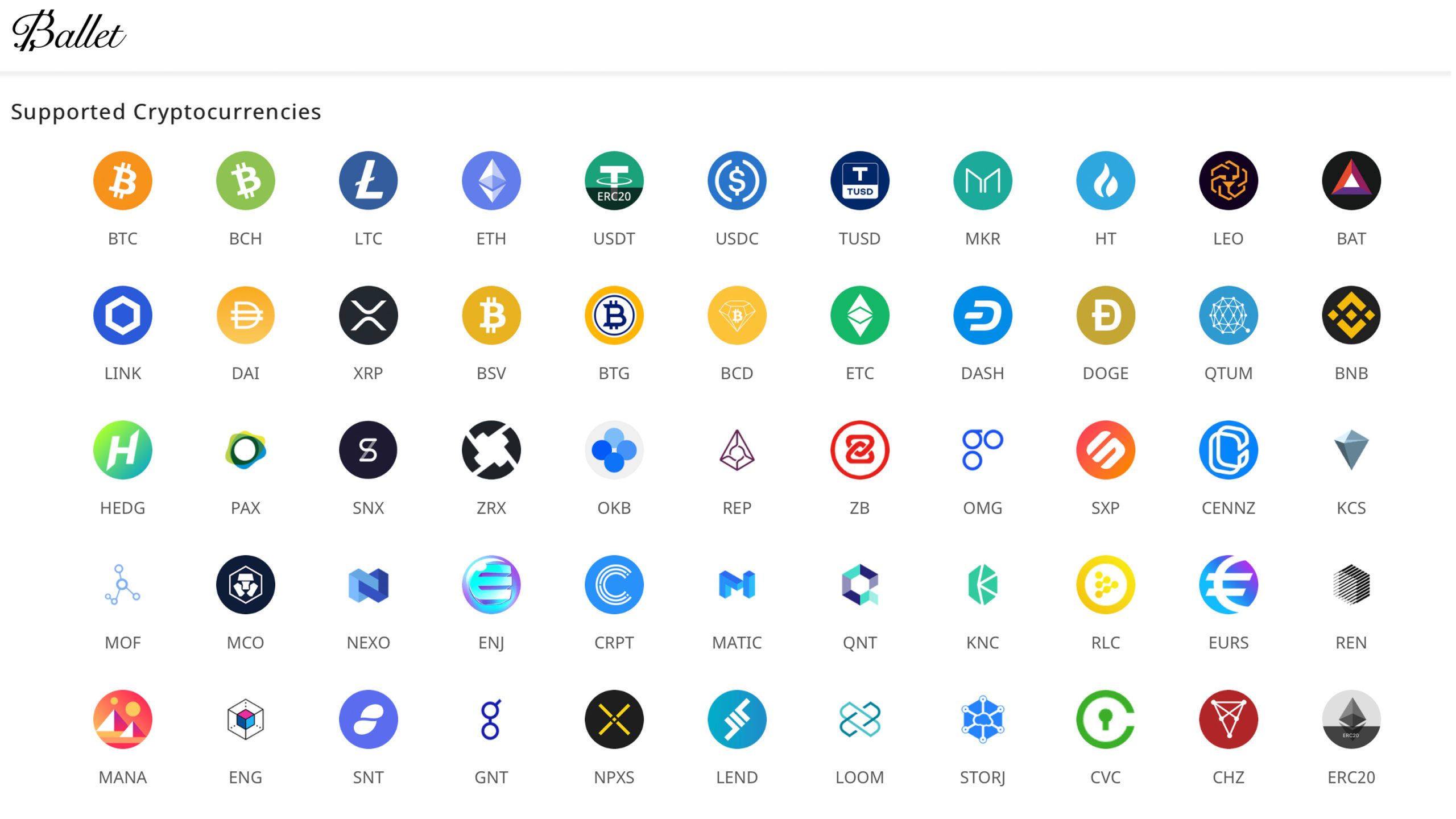 Lee highlighted that what he’s done “has never been done before.” The Ballet founder says that he invented a new way to utilize the BIP38 standard to not just create a paper-like wallet with multi-currency support, but did it in a way that uses a two-factor private key. “Ballet is very unique because this has never been done before and it supports all forks of Bitcoin, and it supports other coins like ethereum, litecoin, doge, and ERC20 coins as well,” Lee underscored. “However, the card itself only has one primary address with coins like BTC so if you want to enable an ERC20, XRP, you would download the app and scan the QR code on the physical card and simply click manage to turn on other currencies,” he added. Lee further claimed:

In the end, you always have to trust the creator of the wallet, I don’t care if its a hardware wallet because they could push bad firmware. Why do they keep upgrading the firmware if it is so secure? I’m putting my name behind [Ballet]. I can retire, I don’t have to do this… but I do it out of passion.

After the conference, news.Bitcoin.com went back to our hotel and tested the stainless steel Ballet card. The card is thicker (1.22mm) than a normal credit card, but roughly the same size as the average card (42 x 35 mm/34 x 27 mm). The first Ballet series is called “REAL” and right now the firm sells BTC, LTC, ETH, and XRP versions. Although, no matter which card you prefer, the device holds a variety of cryptos like BCH, BSV, USDT, DAI, ETC, LINK, and BAT by simply adding them using the iOS or Android mobile app. 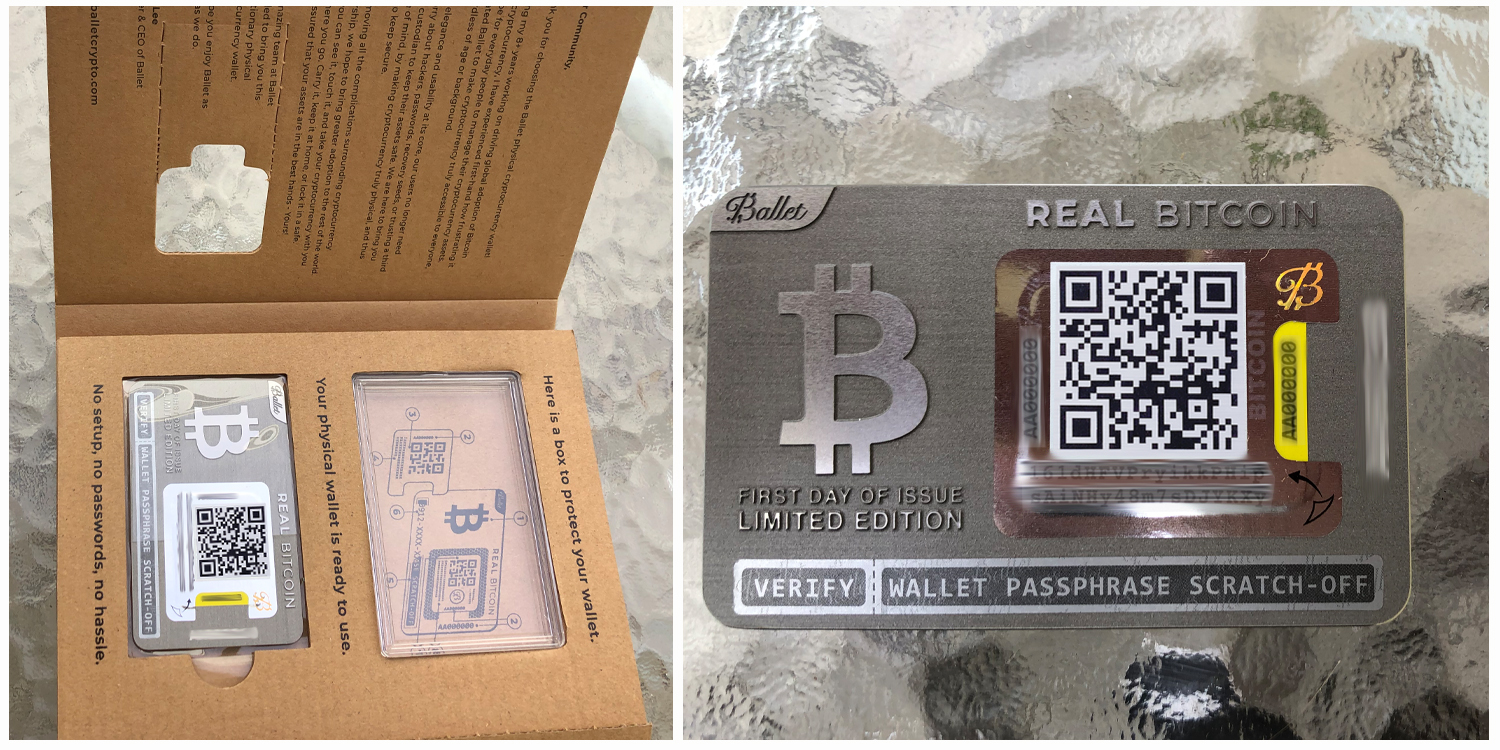 The card we got at TNABC was a certified BTC card, which comes in a sealed cardboard box with a plastic case to hold the card. The product has a QR code sticker (with a scent) that displays a public key for the receiving address and a human-readable address as well. There’s a serial number printed on the card in three different areas and at the bottom front side, there’s also a wallet pass-phrase scratch-off. If you peel the sticker to reveal the QR code of the Ballet card’s encrypted private key, you will also need to use the wallet passphrase to unlock the card’s funds. 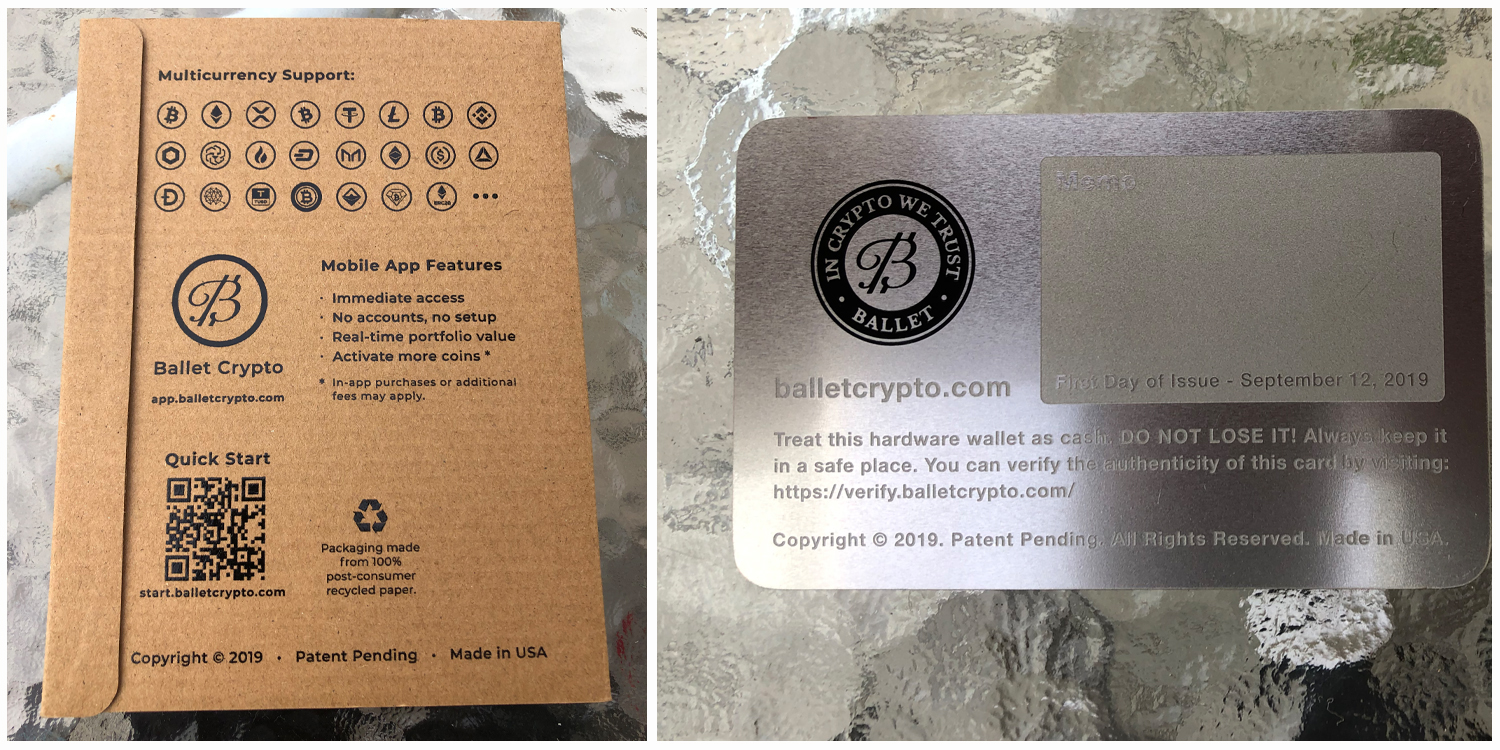 On the backside of the Ballet wallet card is a memo section that you can write on with a marker if so desired. The backside also explains that you need to treat the card just as you would physical cash. The warning stresses not to lose the card, and to always keep it in a safe space.

After taking the card out of the packaging, I downloaded the Ballet mobile app, which can be downloaded for either Android or iOS devices. From here, I deposited $ 7 worth of BTC and went to the management section and enabled BCH support. The mobile application gave me a new cashaddr BCH address and I deposited $ 9 worth of bitcoin cash into my Ballet card. The wallet application noticed the initial broadcasts immediately and the software gives you a blockchain confirmation count as well. If you want to send funds from the card to another wallet, you can do so via the Ballet mobile application. 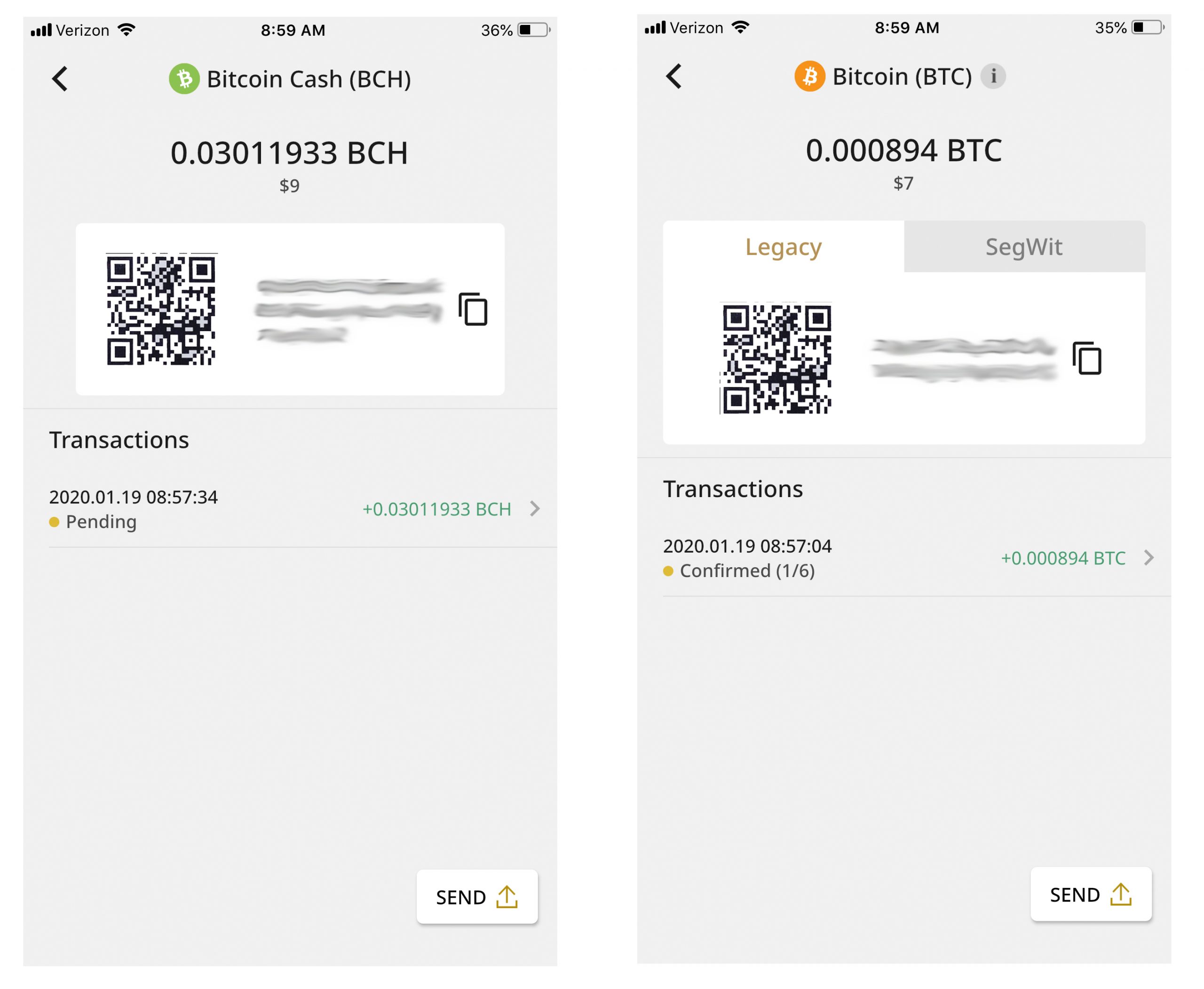 You can set the wallet to “privacy mode” too, an option which removes the ability for anyone to scan the wallet’s public key with a Ballet app without the serial number. If privacy mode is turned on, then the person would need the serial number in order to add the wallet. If you own multiple physical Ballet cards, you can add them to the mobile app in order to keep track of them all. Depending on how many currencies you’ve added to a single card, the card will display the total amount of funds held on each card. 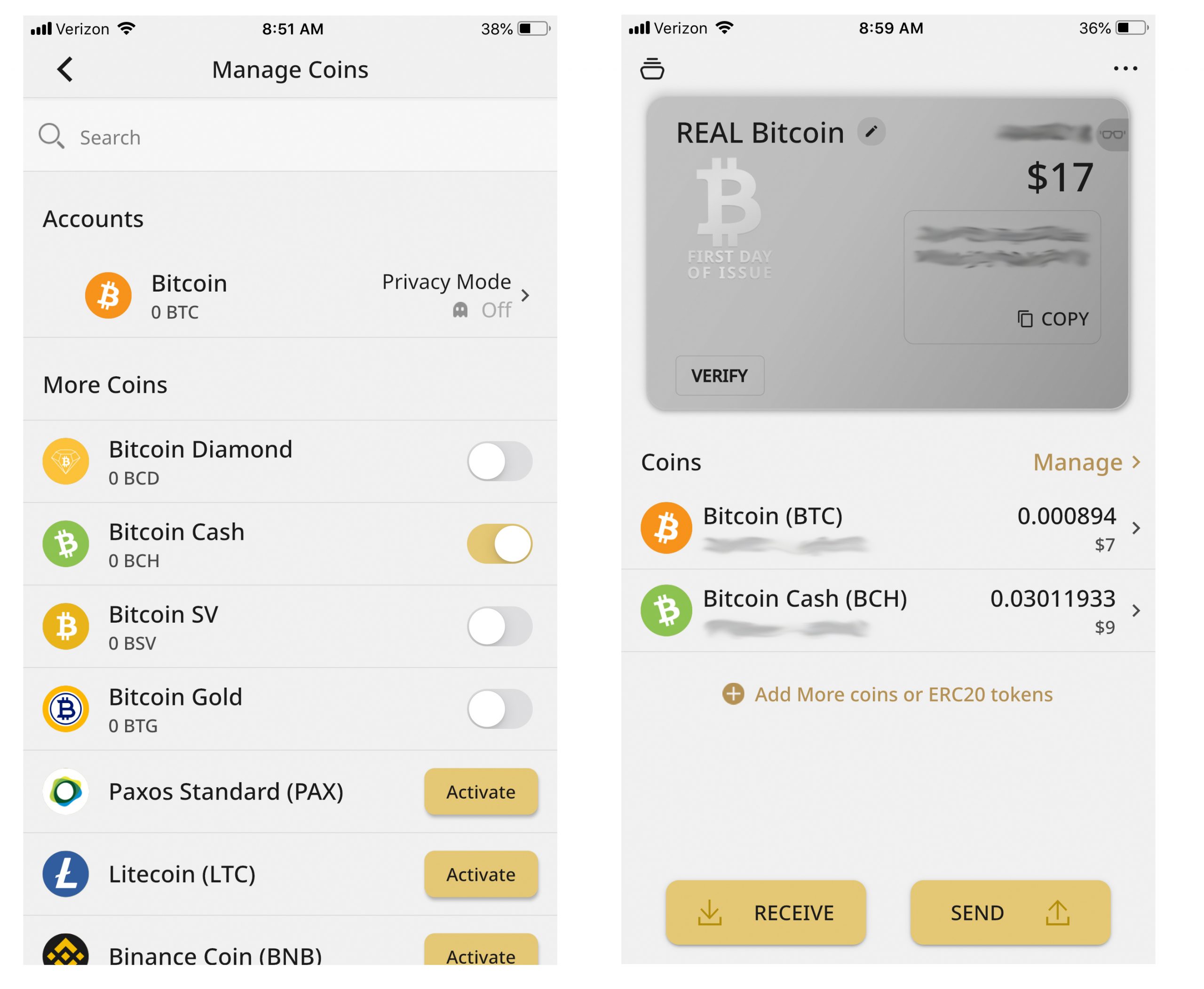 The Ballet card is fairly simple to use and even someone new to crypto could get the hang of it with a few minutes of use. People will also realize that the card can be used as a bearer bond instrument and it could be passed along to multiple people in an offchain manner. However, with this benefit comes greater responsibility, because if someone steals the card, peels the sticker and scratches off the passphrase, the funds will be theirs to keep. If someone stole a Trezor or Ledger, they would at least need access to the PIN to get into the wallet’s funds.

The Ballet card’s first series edition is $ 39 per card and the series that follows the first set is only $ 35. People can also purchase quantities of cards in 3-5 packs, and there’s a 24K gold plated first edition card for $ 99. Individuals can buy the cards directly from Ballet or through a third party seller like the Bitcoin.com Store. The cards are definitely pricier than creating a traditional paper wallet that doesn’t cost much at all to create. But people may appreciate the solid steel design and the fact that they don’t have to generate a private key on their own. The card does outcompete Onedime’s product too, which only supports BTC, and many people will likely enjoy the fact that they can fund a Ballet card with multiple types of digital assets.

Disclaimer: Walkthrough and guide editorials are intended for informational purposes only. There are multiple security risks and methods that are ultimately made by the decisions of the user. There are various steps mentioned in reviews and guides and some of them are optional. Neither Bitcoin.com nor the author is responsible for any losses, mistakes, skipped steps or security measures not taken, as the ultimate decision-making process to do any of these things is solely the reader’s responsibility. For good measure always cross-reference guides with other walkthroughs found online.

Cryptocurrency is cool, and you know everyone wants in – even the ones who say they don’t. Show the world how cutting-edge you are with a bitcoin T-shirt, hoodie, bag, key-ring, even a Trezor hardware wallet. Shipping all over the world, quality merchandise and, of course, a payment system that makes people say “wow!”